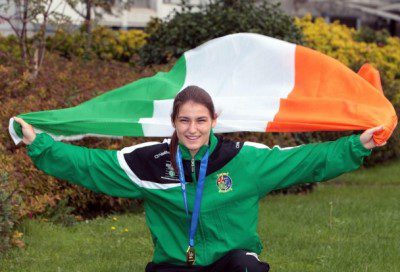 Olympic Champion Katie Taylor will return to ring on Saturday, November 30th at the Ballywaltrim Community Centre in her home town of Bray.

The bout against Finland’s Mira Potkonen will see Taylor continue on “The Road to Rio”, a journey she is hoping will end with a second Olympic Gold at the 2016 games in Brazil.

Since dedicating her historic boxing victory to her home town at her post Olympic homecoming in Bray last summer, Katie has wanted to show her gratitude for the continued support from locals. “It’s with great pleasure that I can finally return to the ring and box in Bray. I am delighted that I can give something back to my local community who have extended such overwhelming support to me over the years,” said Taylor.

Her father and trainer Pete says preparations are already well advanced for Katie’s return to the ring. “Katie’s incredibly driven. She strives to continuously improve and wants to keep winning. Hopefully everything we are doing here will lead to the next Olympics in Rio and that’s the long term goal but in the medium term it’s about defending her European and World titles next year and obviously the short term goal is this fight on November 30th”.

Having secured a fifth successive European Union title by defeating Estelle Mossely of France at the European Union Championships earlier this year Katie says “I’ve been training hard all summer and am really looking forward to boxing at home against a top class European opponent in preparation for future Titles.

“It’s great that local fans will have the chance to see me box on a more personable level,” added Katie.