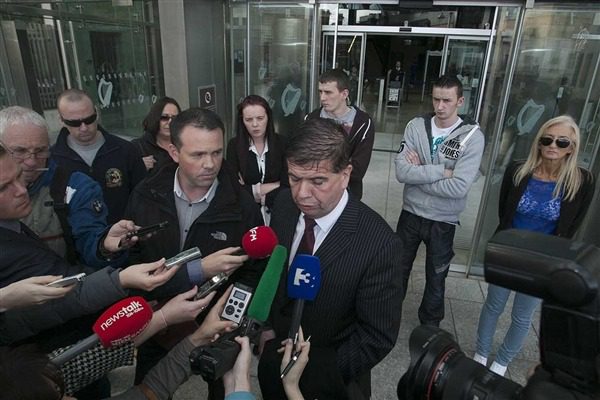 An independent investigation into the deaths of firefighters Brian Murray and Mark O’Shaughnessy must be carried out now that court proceedings against Wicklow County Council have concluded, Councillor John Brady has said.

Wicklow County Council was fined €355,000 at the Dublin Circuit Criminal Court yesterday after it pleaded guilty to three charges made against it by the Health and Safety Authority in connection with the deaths of Officers Murray and O’Shaughnessy six years ago.

Cllr Brady has asked the government to honour commitments made in 2007 when Labour called for an independent investigation into the deaths and the establishment of a national fire service.

“Shortly after the deaths of Brian and Mark the then Minister for the Environment John Gormely stated that an independent investigation would be looked at when court proceedings concluded. That now needs to happen, as I believe a lot of evidence still needs to come to light,” Brady said.

“On 9 October 2007, just after the deaths of Brian and Mark, the Labour Party tabled a motion in the Dáil relating to their deaths. The motion called for an independent investigation into their deaths and went on to call for the full implementation of Farrell Grant Sparks Report on the fire services.

“Key to this would see control of the fire services removed from local authorities and put in to the remit of a National Fire Authority. The motion, which was supported by Fine Gael, also called for the establishment of a full-time fire service in Bray. Sinn Féin and the families supported the motion at the time and I now call on them to follow through as they are now in a position to deliver.”

Meanwhile, the Irish Fire and Emergency Services Association (IFESA) has accused SIPTU of abandoning the two fire officers and making failed promises to their families.

“Brian and Mark were SIPTU members but in their deaths they were abandoned by the organisation that was meant to represent them,” a statement read. “SIPTU made many promises to the dead firefighters’ families that they failed to deliver on. This is truly shocking.”

IFESA also said that evidence is still to come that will have “major ramifications for the fire service” and has criticised the government for not commissioning an investigation into the deaths six years on.

A statement from the Murray and O’Shaughnessy families has said that many unanswered questions still surround the two deaths and that these issues will be addressed during the upcoming inquest.

The families also repeated their calls for the establishment of a national fire service.