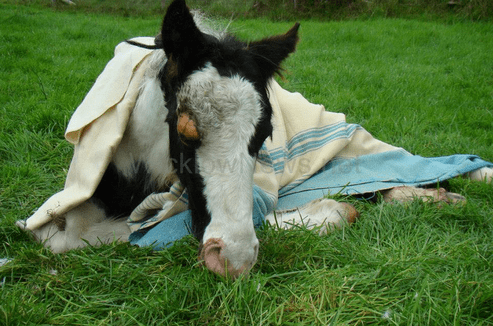 Two weeks ago WicklowNews.net covered a story about a foal that had been taken in by the WSPCA.

Unfortunately, he suffered a setback last week and a return of the severe infection.

Because of his very poor prognosis this time, poor Sulley had to be euthanised, on vet’s advice, to prevent any further suffering.

Staff and volunteers at the WSPCA sanctuary who had been looking forward to a happy ending are extremely saddened by this outcome.

The foal originally came to the attention of the WSPCA on Saturday morning after a member of the public became concerned that the foal had not moved from the same area in a field for a number of days.

After inspecting the incident it was discovered the animal was caught up in barbed wire which restricted his movement.

A vet and members of the WSPCA freed the foal who then received IV treatment and 30 stitches in an operation that lasted five hours.

A spokesperson from the Sharpshill sanctuary told WicklowNews.net: “It is touch and go at the moment as he has lost a lot of blood, but the vet is hopeful.”

“Fingers crossed he will recover. Many thanks to Giovanni for his immediate assistance in treating the poor foal, Nancy who comforted the little foal throughout his treatment and to the local community in helping us with transport.

“The little fellow showed us what determination and spirit he has by getting up on to his feet. Hopefully this fighting spirit will see him through this next few critical days. Help if you can. Thank you”

If you know of any animal in neglect or danger call your local gardai.