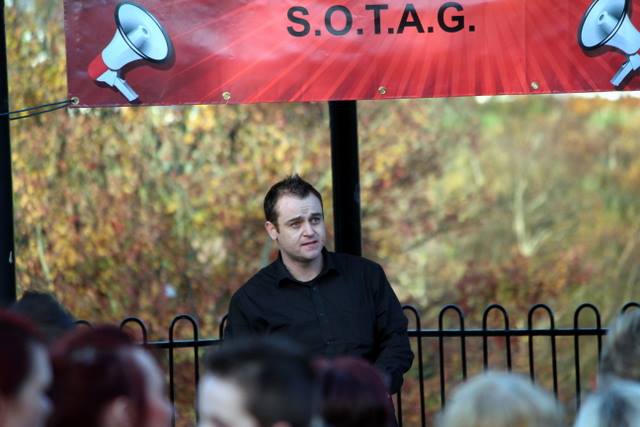 A group of more than 200 people gathered at the bandstand on Arklow’s main street yesterday to protest against the town’s controversial new one-way system.

The meeting was addressed by local resident Sean Browne who organised the protest on social media.

Protesters then marched the length of the one-way system and to the amusement of the crowd were met a by car that made a wrong turn to come up the main street.

Speaking to WicklowNews.net after the protest Mr Browne said he believed the current one-way system has worsened the situation on the main street and that Arklow is more of a ghost town today that it has ever been.

Mr Browne said he believed  the council had a “hidden agenda” and wished to see Arklow’s town centre relocated to Bridgewater on the North Quay.

“The entire one-way system is geared toward driving people to Bridgewater, not the main street,” he said. “All the new signage at Castelpark and Dunnes lane points people back around in a circle to a ‘Town Centre’, which is now Bridgewater. At the North Quay roundabout there are no signs directing people back over the bridge to a town centre, only signs for Dublin and Wexford. That’s because our new town centre is Bridgewater.

“Mark my words, next year the official turning on of the Christmas lights will be held in Bridgewater, not on the main street.” 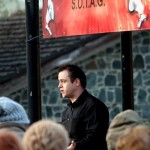 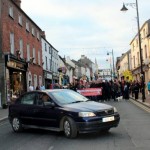 A car made a wrong turn at the wrong time. 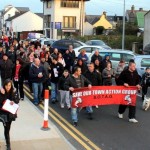 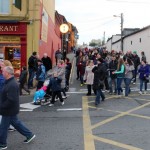 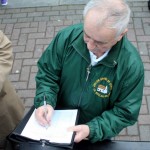 A petition was available for people to sign at the protest 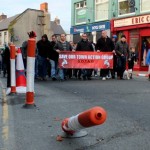 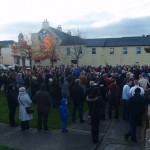 The scene at the bandstand yesterday