Arklow RNLI comes to the rescue of Seal 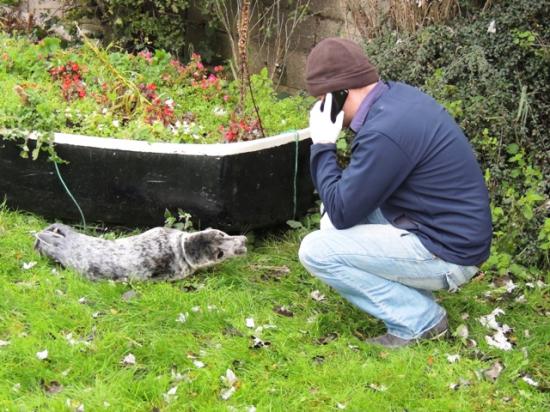 Arklow RNLI’s volunteers were involved in an unusual rescue today (Tuesday November 5) at Arklow Harbours boat slipway when they came to the aid of a seal pup.

Lifeboat crew were alerted to the mammal’s plight by a member of the fishing community who had spotted the seal in an exhausted condition near Arklow Lifeboat Station.

On arriving at the scene, Mark Corcoran, Arklow RNLI Lifeboat Volunteer Press Officer made contact with the Irish Whale & Dolphin Group and the Irish Seal Sanctuary to ascertain the best course of action to assist the seal pup. Also on scene was Tommy Heffernan from Avondale Vets.

The seal was then transported to the Avondale Vet practice by Arklow RNLI volunteers.

The pup is now being cared for by the Irish Seal Sanctuary and will enjoy a diet of fresh fish until it reaches a healthy weight and can be released back into the wild.

Following the callout to Sammy the Seal, Arklow RNLI volunteer Mark Corcoran said ‘We worked closely with the Vet and the other animal charities, helping to keep people away from the seal and then assisted in carrying it safely to the jeep and then into the veterinary practice.’

Mark added: ‘It was an amazing experience to get so close to a seal, they’re really fantastic creatures, and it’s not an everyday occurrence. Thanks to the teamwork demonstrated by the different groups involved, the story had a happy ending and I’m really pleased that we could help.’