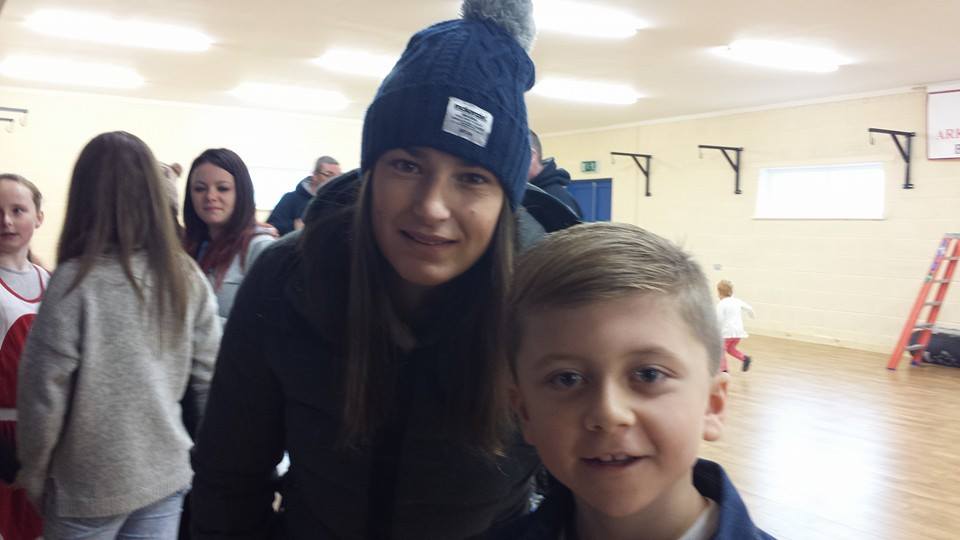 The Wicklow boxing league continued in Arklow this Sunday morning and participants were boosted when Olympic gold winner Katie Taylor made a surprise visit to the refurbished club house.

Arklow boxer Danny Byrne was said to be ten feet tall after Katie told him after his bout he was great.Mother Tammy said “It has made his year, he is so proud.”

Wicklow Boxing League continues every Sunday morning in Arklow Boxing club Boxers from the clubs in the county paired off in the second session of the league in Arklow on Sunday First in the ring was Daniel Byrne of Arklow against Jordan Moorehouse, Enniskerry and both boys were evenly matched, Byrne the eventual winner on a majority decision.

Eimhin Mc Cormack boxing the much taller Killian Clarke, Rathnew had a job getting inside Clarkes reach Both boys boxed well with Eimhin getting the decision of all 3 judges.

Conor Lewins of Wicklow BC was much too strong for Euan Culbert, Rathnew, Lewins being the decisive winner.

Josh Whitmore, Arklow and Sean Byrne of Wicklow both worked the combinations well, Whitmore being a little more accurate winning by a majority.

Jason Breen of Arklow was up again it when boxing John Connors of Enniskerry in an attacking contest. Breen winning unanimously.

Jordan Balfe of Blessington was in trouble from the bell against James Fell of Enniskerry and the fight was stopped by Referee Al Morris after Jordan had received two counts of 8.

In a girls bout Jade Matthews of Arklow had a great scrap with the much smaller Daina Moorehouse, Enniskerry . Daina edged ahead in the last round and won by majority.

In the last contest of the day Adrien Komerek, Enniskerry was in charge at all times against Jason Smith of Blessington winning unanimousily.

The league continues next Sunday morning at 11am where 16 bouts are down for decision. Admission is €5 for adults Children free.

Elaine Harrison and John Sheil both won the Leinster Championships at the National stadium last week. John was involved in a cracking semi final bout with John Broughan from the Mullingar BC and in the final round John scored with consecutive rights to the head which should have prompted the referee to stop the fight but the fight ended with John in total control.

In the final john defeated Niall Cooney from Dealgan club in a real close battle.

After a close first round John took control and scored at will as the Dundalk man tired.

At the end John won the title on a split decision.. Elaine boxed the very experienced Rebecca Gorman from the Clonn Aoife club in the final and gave a polished performance over the 4 rounds. In the final round Elaine shook the Dundalk women with solid rights and was the clear winner. Both boxers will now contest the National Championships in Dublin next week.