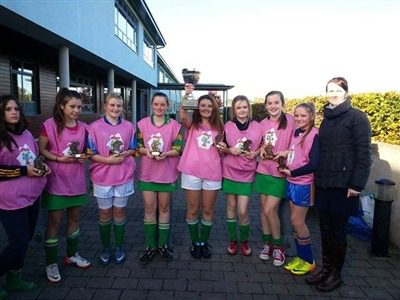 Congratulations to The Curlews who are Winners of the Kilcoole Camogie Club’s Treetops Cup 2013!

The Club ran this internal League for girls aged 13-17 throughout the year culminating in the Cup and Shield Finals on Sunday November 3rd. The idea behind this League was to provide extra games for this age group while recruiting new players as well as involving those already playing. It was also intended as a means of unearthing hidden (!) managerial talent and providing referee experience and training.

The games were played in Colaiste Chraobh Abhann on Sunday morning. Timing was tricky as the matches had to tie in with scarce free days for U13, U14, U15 and U16 teams as well as Seniors!

However, it all happened and the Finals were played on a bright and sunny November Sunday.

38 girls played in this League from start to finish and there were also some interesting observations to be made on the managerial side!

Kilcoole Camogie Club would like to acknowledge the support of local enterprise -Treetops Daycare & Afterschool Club who came on board as Sponsor. It would not have been possible without this support.

In the Shield Final The Kingfishers with Captain Karen Douglas collected the title after a very close encounter with the Lapwings. This match was literally won with the last puck of the game!

Well Done to everybody involved – both on the pitch and behind the scenes. Thanks to CCA for the use of their Pitch.

This was a very successful adventure and one to be most definitely repeated!
Pictures above are the winning Curlews with Sponsor Aine Conway from Treetops Daycare& Afterschool Club.