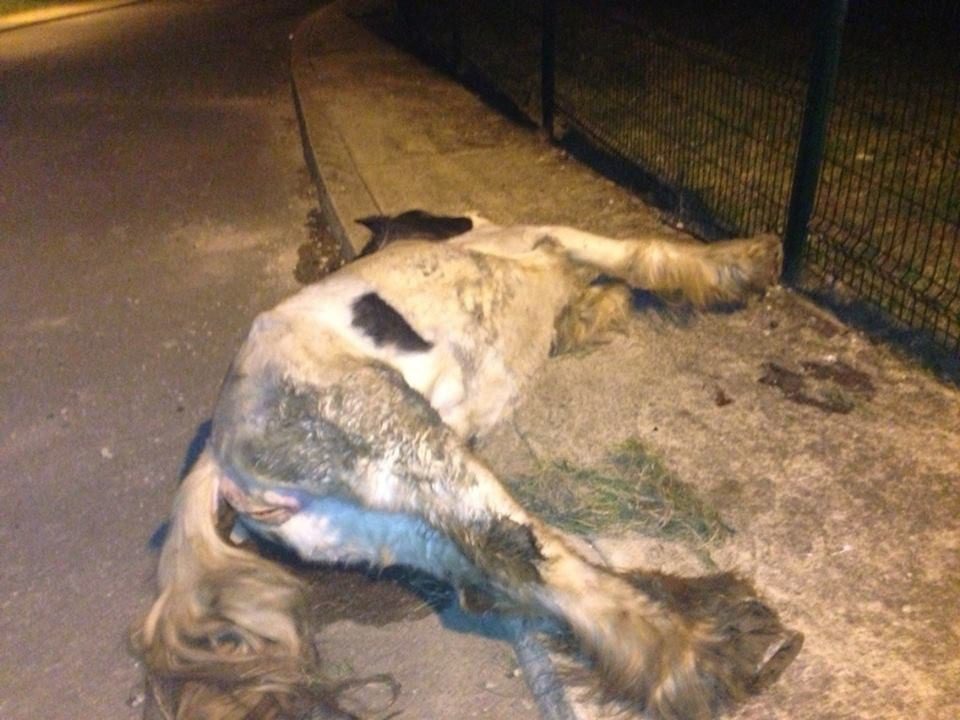 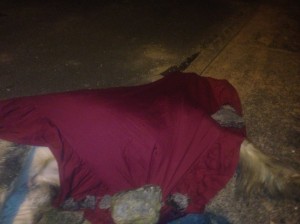 Residents covered the horse with a sheet

In an act of sheer barbarism, a horse was kicked and beaten to death by a group of men after being thrown from its horsebox yesterday evening in Wicklow Town.

According to eyewitness reports, a group of men arrived in the Hillview estate, Ballyguile at around 4.30pm with a horsebox in tow and attempted to unload the animal onto the green area for grazing.

When the horse refused to walk out down the ramp, the men opened the back doors of the horsebox and accelerated sharply, causing the horse to tumble out into the street.

Witnesses told WicklowNews.net that the horse was unable to stand up and was then beaten by the group of men.

A vet was called to the scene at around 6.30pm and the horse was then put to sleep.

More than 12 hours later, the carcass of the horse was still lying in the street covered with a sheet which had been placed over it by residents. According to one witness the horse’s foal was standing over it, nuzzling the remains.

Cantor Equine, a Dublin-based company used for horse seizures, has been tasked with the removal of the remains and the cost will be met jointly by Wicklow County Council and Wicklow Town Council. 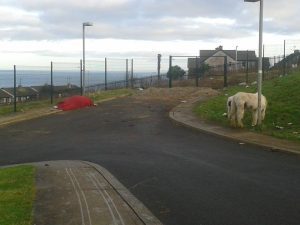 The horse’s remains lay in the street overnight

Wicklow Town Councillor Pat Kavanagh said she feared that this would not be the last incident of its kind as long as microchipping laws remain unenforced.

Cllr Kavanagh was critical of the Wicklow County Council operation last week that saw 63 horses removed from estate, saying that “money could have been better spent” on initiatives to educate horse owners in the area so that animals kept in the field were microchipped and properly cared for.

“My concern now is that we are going to have horses from all over the country brought to Wicklow and this is going to be an ongoing problem. Are we going to have people coming to Wicklow to dump their horses as a free way to get rid of them?”

Eight horses remain on the estate and have received care from the Irish Horse Welfare Trust.

Gardai in Wicklow Town are investigating the incident and anyone with any information is asked to contact them on 0404-60140.