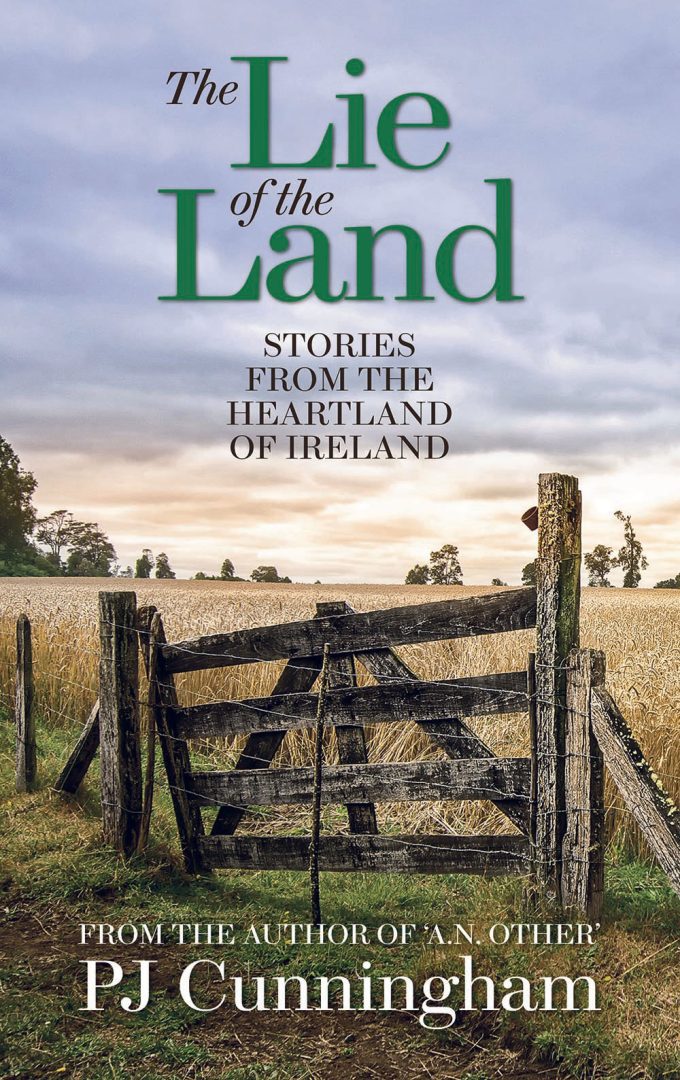 ‘The Lie Of The Land’ by Bray-based author and journalist PJ Cunningham is a fascinating insight into the clash of old and new rural Ireland in the sixties – an Ireland of arranged marriages, religious beliefs, land feuds, personal tragedies and Saturday night baths.

Loosely based on actual events, ‘The Lie Of The Land’ gives a harsh but knowledgeable insight into family and community relationships as they juggle with legacies of loyalty and feuds handed down through generations.

Ireland in the sixties was a last curtain call for the comely maidens as they met their modern sisters in high heels and mini-skirts walking past the village green. They were headed to the ballrooms of romance for a Club Orange, a slow dance and maybe a walk home if the local parish priest wasn’t out on his rounds.

Our past was indeed a different country in many ways but when you consider the jealousies, the greed, the caustic tongues, the family wars over money and the inclination to fall out between neighbours, much has stayed also remained the same.

This was Ireland before daily showers – washing was a Saturday night thing in the enamel bath placed in the middle of the kitchen floor. People washed up as far as possible and down as far as possible. Whatever was left had to take its chances.

Every member of a family had work clothes, school clothes and ‘good clothes’ for a Sunday morning.

Watching above all the activity of the old and the new was the gimlet eye of religion and in particular the Catholic Church.

Even so, it wasn’t just as simple as orthodox belief. Lives were laced with centuries of superstitious practice and pisheogs.

For every Hail Mary, someone had to touch a churn for luck or appease a hostile fairy fort by turning a coat inside out if lost in the fields at night.

“I started out to write The Lie Of The Land to show that life growing up on a farm always had a grim truth attached to it,” said author PJ Cunningham.

“Rearing pet lambs or a baby piglet was great for a child, but then the butcher arrived a few months later to take it away. That brought its own harrowing life lesson that farming is as much about death as living.

“It was while researching The Lie Of The Land that I came to realise I was the product of three arranged marriages, my parents and both sets of grandparents.

“My maternal grandfather is the reason I, or indeed my brother, have never taken a sip of alcohol in our adult lives. He almost drank his brothers’ farm out and then was kept on the dry to marry into my granny’s ‘cosy farm’ four miles away – a world apart a century ago.

“He almost drank that farm out too, except that death – and a purebred bull, kept the business afloat.

“He was described by my father as the straightest man he had ever met while my aunt, his daughter, said he was the most loving dad.

“That was the truth and the paradox of farming life – the Lie of the Land.”

Extract from Lie Of The Land

On my mother’s side, a feud over money led to a schism that set brother on brother that the generations haven’t healed. Where did we hear of that before?

In this case the elderly mother had put £200 by to share with the two sons when they were married. The only problem was she couldn’t remember where she had hidden the bounty when they came looking for it.

One brother believed the other was in cahoots with the old lady and built on two rooms to the dairy end of the original homestead. As the brothers carried out their work on the farm without ever uttering a word to each other down the years, even the hens in the common yard were divided. When it came to feeding times, the two wives stood sentry so that only their chickens got fed.

It was a clocking or hatching hen that ultimately resolved the conundrum that had split that side of the family.  When sitting on eggs for three weeks, a hen must find a place out of the way so that she is not disturbed for continuously keeping the eggs warm by sitting on them. This hen found such a place at the back of the house up in the thatch, which had steps up to the roof.

When finally the chicks emerged and were being taken down, the hen, somewhat upset at the handling of her young, kicked out in anger and dislodged a box containing the money.  A fowl ending to a generation’s feud but by then too much water had flowed under the bridge for real rapprochement.

The last meeting of superstition and the supernatural in my youth took place around the time of my mother’s death.

During the Saturday night that she died, a new black dog we had been given spent the early hours howling from her bedroom windowsill.

Going to Mass the next morning, the lady who lived beside us told my father she knew once she heard the Banshee during the night, that my mother had passed on.