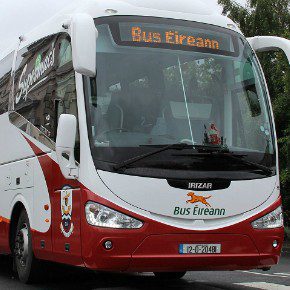 Councillor Pat Fitzgerald has welcomed the news that Bus Éireann are to reinstate the southbound stops in Arklow that were cancelled on January 1.

Starting on January 23, the Route 2 service will again stop at Lidl and the Main Street. The southbound stops were previously struck off the timetable because of the one-way system.

“From Thursday, January 23, bus users will again be able to get on and off at the Church and Lidl,” Cllr Fitzgerald said. “This is great news for people travelling to Waterford, and commuters who were inconvenienced on their return journey from Dublin.”

A sign posted on the Wexford Road alerting customers to the previous change.