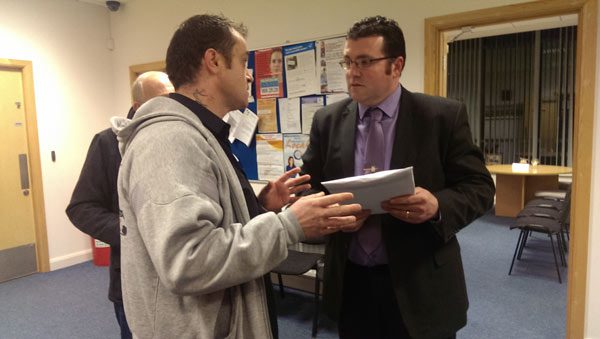 110
SHARES
ShareTweetSubscribe to our Newsletter

A much-anticipated meeting of Arklow Town Council to discuss the controversial one-way system ended in farce last night with no vote taken on the future of the scheme.

A motion to rescind the one-way system was tabled by Councillor Nicky Kelly, but councillors were unable to vote on the matter as the meeting ran over time, meaning any decision taken would have been void.

Before the meeting began, Mayor Tommy Annesley was presented with a 2,000-signature petition calling for the one-way system to be reversed.

Cllr Vincent McElheron began proceedings by saying how “disgusted” he was that protocols allowing the presence of the public at the meeting had not been followed by the council.

Concerned traders and members of the public who attended last night’s meeting were asked to leave the room because of a lack of seating and were forced to stand in the hallway and listen through an open door.

Before any discussion of the one-way system took place, the members of the public were treated to a dismal two-and-a-half hour budget meeting which was punctuated by prolonged arguments over the county demand and Irish Water.

The meeting was further prolonged when councillors asked the public to leave the room for 30 minutes while they discussed “commercially sensitive” matters.

Discussion of the one-way system finally got underway at 9.30pm and after an eight-minute opening address by Cllr Kelly, it became apparent to those present that no decision would be taken that night once each of the eight councillors had their say.

Cllr Donal O’Sullivan said he felt the subject was “shoehorned” into their meeting, stating that the one-way system deserved a much greater debate and admitted there had been a “serious failure of information” on the part of town council until now.

Cllr Peter Dempsey concurred, saying “we didn’t give out the proper information”, while Cllr Miriam Murphy said the whole affair left her “embarrassed to be a councillor”.

Cllr McElheron then called for a public plebiscite on the matter which would see the views of the public taken into account.

A motion to adjourn the meeting to next week to again discuss the one-way system was then swatted away by Acting Town Clerk Michael McNamara, who reminded those present that the meeting was over and no more motions could be tabled.