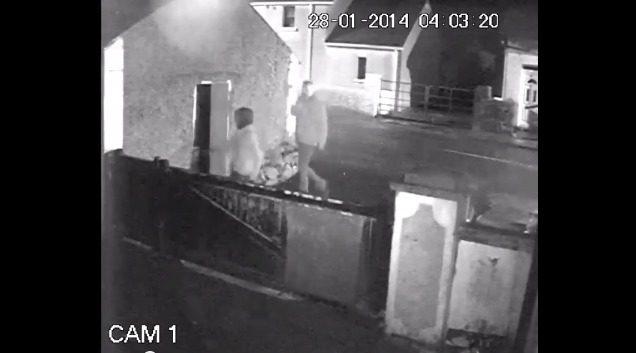 291
SHARES
ShareTweetSubscribe to our Newsletter

[Tweet “Two burglars have been caught on CCTV attempting to steal a 4X4 vehicle in Ballinaclash.”]

The incident occurred shortly after 4am on Tuesday.

According to one source, a jeep was then stolen shortly afterwards in Aughrim leading gardai to believe the pair featured in the video are the culprits.

The two men can be seen approaching a gated premises cautiously and then making off on foot.

The description under the video reads: “Please email anonymouscctv@gmail.com if you can identify either of these two men caught on CCTV. Substantial reward upon conviction.”

In a separate incident, gardai are investigating the robbery of the Topaz service station in Ashford. The robbery occurred at 8pm on Tuesday.

Two men entered the premises and while one waited at the door, the other demanded cash from the young attendant.

The same garage was robbed earlier this month when two men robbed the garage on January 11.

Gardai in Arklow are also investigating an incident in Inbhear Mor Park which saw a number of cars damaged on Tuesday.