The inquest into the deaths of firefighters Brian Murray and Mark O’Shaughnessy was unexpectedly adjourned yesterday in dramatic fashion after new evidence came to light.

The unexpected turn of events centred on a partly charred and crushed five-litre tin can with a label on it indicating it contained a highly flammable liquid.

Once the fire was extinguished on the 26th September at about 3pm the Crime Scene Investigation Unit from the gardaí entered the burnt out premises at Adelaide Villas, Bray and photographed the entire area. The scene was then secured and released at about 6.30pm.

They photographed the interior of the building and the charred can was discovered on a pile of burnt debris, its lid lying beside it and contents label still legible.

At the inquest, photos taken on September 26th by gardai clearly show that there was no such can where the Council and Michael Slattery claim to have found it the following day.

The last occupant of the disused factory before the fire broke out, a joiner named Alan Ryan, also told the inquest that the can was not there when he vacated the premises in 2006.

During the inquest it was suggested by the barrister for Wicklow County Council that the liquid inside the can may have expanded during the blaze and exploded, causing a fireball which incapacitated the men and led to their deaths.

It had also been suggested that one of the firefighters may have triggered the event by stepping on the can.

Yesterday’s dramatic turn of events occurred when Michael Slattery was giving evidence to the court.

Mr Slattery was using photographic projections during his testimony. As he did so, Det Garda Maurice Hickey, the lead garda in the criminal investigation into the men’s deaths, interjected from his seat in the court.

“Can I clarify?” he asked as Mr Slattery was giving evidence. “That photograph you took on the 27th that we’re seeing there; that’s in situ, not moved, that can?”

“I’ll show a photograph of the 26th then,” said Det Garda Hickey, before connecting his iPad to the projector and displaying an image on screen.

“What are we seeing there?” asked the coroner, Dr Brian Farrell.

Dr Farrell then adjourned the inquest saying: “I need to clarify this matter before we go any further.”

Councillor John Brady has called for a full garda investigation into the circumstances surrounding the discovery of the tin can at the scene.

“The evidence clearly shows that the can mysteriously appeared sometime between 6.30pm on the 26th September 2007 and the time the senior staff from Wicklow County Council and Michael Slattery photographed its presence the following day,” Brady said.

“This raises the following serious questions, who put the can there? Why did they put it there? I believe the Gardaí must now investigate this to establish the answers to these questions and hold the person or persons responsible.” 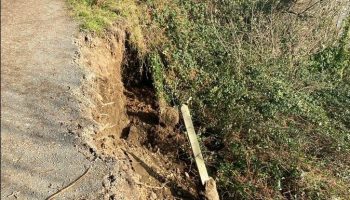