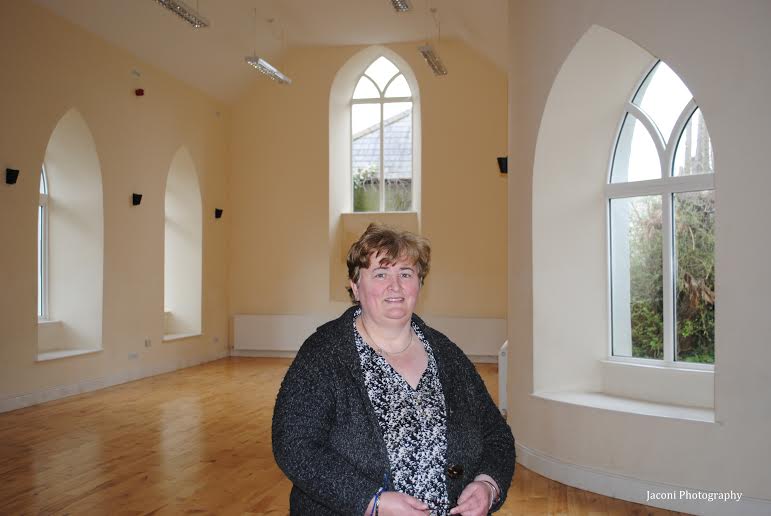 Cllr Pat Kavanagh will be hosting a Coffee Morning with Storytelling and Face painting for kids at the Parochial Hall, Wicklow on Friday 25th April from 10.30am-12.30pm.  All proceeds are in aid of Cllr Kavanagh’s Election Campaign

Cllr Kavanagh will host this fundraising event at a venue very close to her heart. She has been a member of the committee which refurbished the Parochial Hall since 2006, and is now a Director of the company which runs the hall on behalf of the community. She says:

“The restoration of the Parochial was a long and arduous task, during which we faced a great many challenges, but it was all worth it in the end.  The hall is of huge historical significance, being only one of 6 pre-penal reformation churches left in the country.  It was the first church in Wicklow, and then became the first school, teaching both boys and girls; later it became the first cinema and the first community hall.  It will shortly be opening its doors to the first Youth Cafe in the town. This hall has served our community well since it was built in 1795 and I am very proud to be associated with it”

The hall also holds fond memories for Pat on a personal basis.  This is where she first met her husband, local man Fran Murphy in 1980, and where her fledgling childcare and arts centre business began, later to become The Cave, where Pat is a Steiner teacher. “I would like to welcome everybody to come in and have a look around the hall. It is bright and spacious and suitable for all sorts of classes, groups and parties. Come and enjoy a cup of tea and some mid-term activities for the children”

Padraig Boyce, Chairman of the Wicklow Community Resource  Centre commented: “Pat has worked as part of the team of the Wicklow Community Resource Centre (Parochial Hall) Committee since 2006. At that time the roof of the hall was falling in and there was no other community or youth centre in Wicklow so we embarked on the long road of refurbishment, fundraising and reconstituting the legal status of the hall so that it would remain forever in the ownership of the people of Wicklow. Seven years later, that same team saw the opening of a completely updated hall, combining heritage and history with all mod cons. Pat stuck with the committee through thick and thin and I am more than happy to support her in the local elections for Wicklow”.