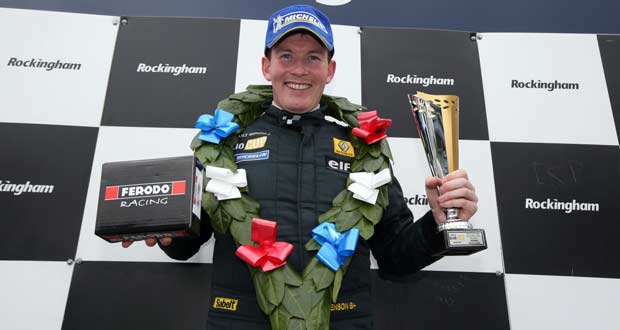 The Wicklow man claimed victory in the opening round of the Championship, before finishing third in round two later in the day. He now finds himself 13 points in front of his opposition as he heads into rounds 3 and 4 in six weeks time.

Both races were not without there drama though. Dickenson had qualified in pole position for both races and he led away at the start of round one but he was passed at the end of the first lap by Paul Streather.

There was then a safety car period and when the race resumed he was able to reclaim the lead after a mistake by Streather. Dickenson controlled the race after that and he was glad to claim the win, despite the fact that the race was stopped early due to another collision.

“Paul got past me with a great move and I sat behind him for a few laps, put the pressure on and he out-braked himself into the first corner. It’s never nice winning under red flags, but I was kind of happy to in the end!.”

Race two was not with out drama either.  As in the first race Dickenson led away from the grid but was soon passed for first spot. He remained in second until the last lap when he was passed by Luke Herbert.

He regained second place going into the last corner but the stewards demoted him to third after the race because they felt he had have made light contact with Herbert.

Rounds three and four of the Championship will take place in Oulton Park, Cheshire on Saturday May 17th.