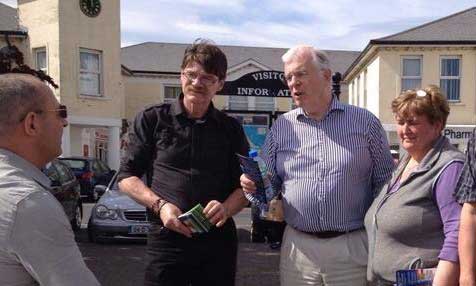 Cllr Pat Kavanagh was out and about this weeking, introducing the people of Wicklow to Independent MEP Candidate Diarmuid O’Flynn from

“Ballyhea Says No”, accompanied by TD Peter Mathews.  Cllr Kavanagh says “Please give your No 1 vote for Europe to Independent Diarmuid O’Flynn for MEP – from Ballyhea to Brussels. Diarmuid is endorsed by Constantin Gurdgiev, Peter Mathews, Stephen Donnelly, Clare Daly, Joan Collins, Maureen O’Sullivan, Thomas Pringle TD … and Me! The financial experts are telling us that THIS is the man who needs to represent us in Europe.”

Cllr Kavanagh will be watching the voting results carefully over the weekend, as she is a candidate herself for the Wicklow Area. A well-known community activist, Cllr Pat Kavanagh became involved in the restoration of the Parochial Hall Community Centre and Youth Café 8 years ago. After much legal wrangling and fundraising, Pat and the Committee re-established public ownership of the hall and the restoration was completed in 2012.

Responding to a plea by young people for a skatepark for Wicklow, Pat was the only Councillor on the committee that brought about the recently built state-of-the-art Skatepark and Outdoor Gym. Pat also ensured that provision was made for accessible play equipment for children with disabilities in the plan for the new playground on the Murrough.

Concerned about the effects of the recession on the community, Pat was instrumental in setting up Wicklow Men’s Shed, which is now open 5 days a week. “Social isolation has a devastating effect, particularly on men’s mental health. The Men’s Shed gives men a purpose in life, to use and share their skills and to learn new things”

Cllr Pat Kavanagh is also a founder of Wicklow Film Club, now in its 6th year. She produced 2 videos for YouTube, ‘Happy Christmas From Wicklow’, which reached over 11,000 Wicklow emigrants

Cllr Pat Kavanagh has had a life long interest in the environment. She is a long-standing member of“Friends of the Murrough” who are working to preserve the Murrough wetlands and cliff walks around Wicklow Head. The Group submitted a 17-page visionary blueprint to the Dept of Environment to promote eco-tourism, and Pat herself was responsible for the wild flower display along the Murrough in 2012 and for successfully having a motion passed at Wicklow Town Council calling on the Government to ban fluoride from the public water supply.

Cllr Kavanagh’s interest in heritage and conservation is reflected in her 8-year commitment to the restoration of the Parochial Hall. The hall is now a state-of-the-art youth and community centre. “The Parochial Hall is one of only 6 pre-Penal Reformation Churches left in the country. But for the hard work and dedication of the Committee, we could have lost this national treasure”

The only Councillor to submit 9 recommendations of local heritage interests for inclusion on the Register of Protected Structures to the new Wicklow and Environs Development plan, Pat has been an active campaigner against proposals to alter Fitzwilliam Square and successfully led a campaign to save the trees on Bachelors Walk. She added “The people of Wicklow take great pride in their heritage and we need to preserve the unique character of Wicklow’s towns and villages for future generations”. 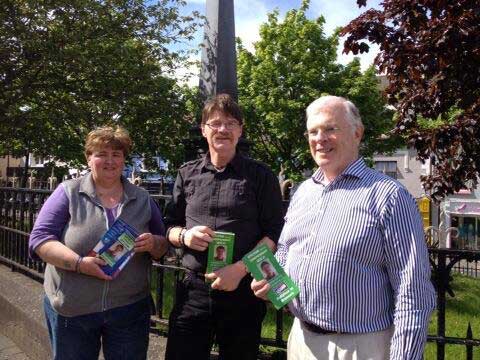 An Anti-Austerity candidate, Cllr Kavanagh is opposed to Property Tax and Water Privatisation. She says “Water Charges and Rates are already crippling small businesses in our towns and villages. Whether you live in an urban or rural community, these charges adversely affect us all. I will not vote for any budget which seeks to impose greater financial strain by increasing Rates or Charges”.

Cllr Kavanagh continues, “I am angered by the hardship I see all around me, people losing their homes, unable to find homes under the RAS scheme and unable to access social housing while NAMA’s property portfolio is the largest in the world. As your Councillor, I will demand that ghost properties are made available for social housing. I will push for Rent Caps on social housing, a return to the Long Term Leasing Scheme and the refurbishment of derelict housing stock.”

“People with disabilities have also suffered severely with a reduced budget for Housing Adaptation Grants. Under the Barcelona Declaration, there must be a concentrated effort made towards universal accessibility. I have already used this commitment to ensure that the new playground for the Murrough will have a wheelchair accessible swing, roundabout and slide.”.

“Wicklow is entering a new political paradigm, and we can all be instrumental in its success. My strength lies in my determination and I have never been afraid to challenge Council practices or reckless spending. I object to junkets and condemn waste of public money; I have followed through on planning enforcement and freedom of Information.”

Cllr Pat Kavanagh has made a commitment to the people of the Wicklow area to continue  to hold Councillors and Officials to account, and insist on transparency. “I will demand higher standards in housing conditions and provision; better roads and transport and clean fluoride-free water. I will vigorously oppose austerity policies such as household tax and water privatisation

I will continue to fight for disability rights, environmental and heritage protections and animal welfare enforcement, all of which I am passionate about.

I will continue to keep the public informed and help to access grants to benefit our communities; I will assist businesses, farmers and craft markets to grow and flourish and fight for supports for you. I will work with the new Council to bring inward investment in jobs and tourism for the County,

As a public servant, my job is to serve you and your families. For the strongest voice in Wicklow Co Council, please give me your No 1 on May 23rd.”