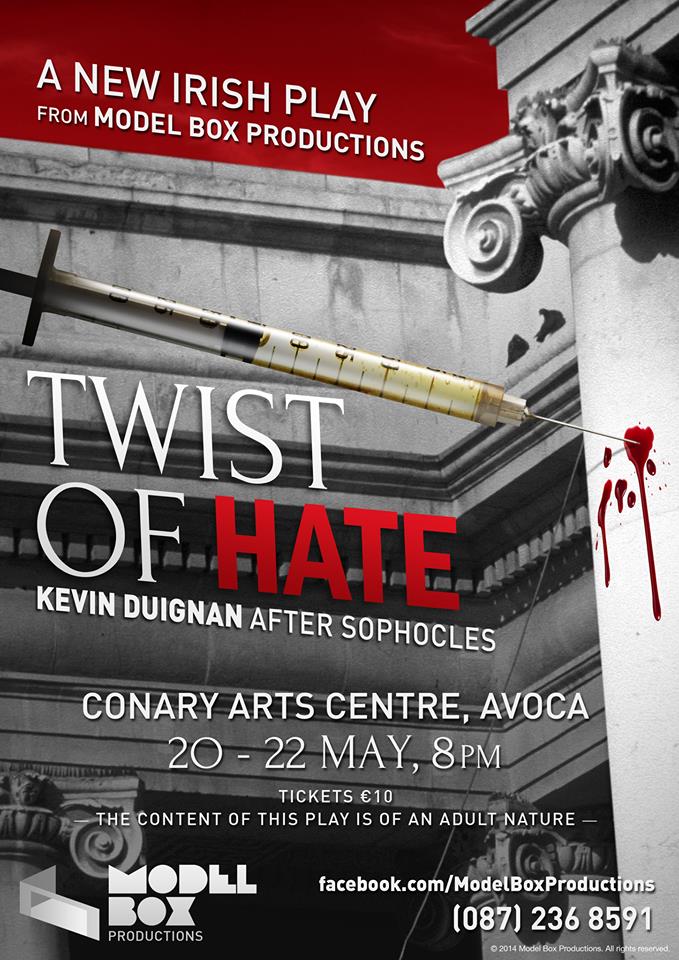 Model Box Productions presents
Twist of Hate – written by Kevin Duignan (after Sophocles)
A west Dublin housing estate provides the location for this reworking of the ancient Greek tragedy, ‘Electra’ by Sophocles. This time the story revolves around the protagonist Ellie; who witnessed her father’s murder at the hands of her mother and her lover fifteen years previously. Determined to avenge his killing she awaits the return of her exiled younger brother Ollie from Spain, but tragic news threatens her plans for revenge and make her difficult situation seem even worse.
Resentment and bitterness permeate her tragic existence and suppressed memories from her troubled past still haunt her; time is not on her side and she must act fast if she is to survive.
Model Box Productions first ever production. The amateur group was formed late last year with a view to providing an outlet for new and innovative amateur theatre in the area. The cast features many well known actors from the greater Wicklow/Rathnew area;  Noreen Higgins, Maggie Murphy, Pauline Greer, James Murphy, Vincent Morley, Tom Murphy, Tom Fantom and Patrick Mahood.
Directed by Kevin Duignan
This is an exciting and innovative play and should not be missed! Tickets are just €10 and can pre – booked by contacting 087 2368591 or purchased on the night.
***The themes and language of this play are of an adult nature and therefore it is unsuitable for a younger audience***
Conary Community Hall, Avoca
May 20th, 21st and 22nd @ 8pm
All tickets €10 and can pre – booked by contacting 087 2368591 or purchased on the night.
Followed By….

“After Sarah Miles is never downbeat. Tender, compelling and lots of fun”

‘..a lilting wonder of exquisite exploration, draws the listener into a world where language itself is redemption. It is pure art, perfection in itself.’

After a lifetime of wrestling with the tides fisherman Bobeen finds it hard to face the sea now, but what he discovered in the mouth of the harbour almost thirty years ago keeps calling him back. This time it will connect him to what he thought was lost and gone forever.