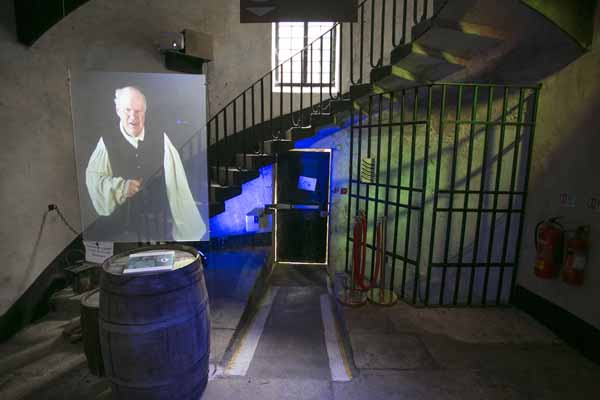 One of Wicklow’s most iconic tourist attractions has undergone a tremendous €240,000 transformation, which sees the ancient prison become one of the country’s most high tech virtual reality historic attractions.

The project funded by Fáilte Ireland and Wicklow Enterprise Park is designed to engage the senses and bring to life two of the most turbulent centuries of Irish history.

Holographic projections of cruel prison guards, lifelike mannequins of major historic figures and state of the art audio-visual systems recreate the sounds of the defiant cries of the 1798 rebels, the famine era the War of Independence and Civil War.  The replica two-deck transportation ship now features holographic interaction with the ship’s Captain as visitors climb aboard the torturous 200-day journey to Van Diemens land.

The Red Coats ominously occupy the main floor of the prison and the Gaoler is brought to life via holographic audio visual projections.

Wexford-based multimedia company MMID will have the entire project completed and open to visitors from the 20th of May (this week).

Designed to engage all the senses, visitors will step back in time as they journey through the original prison cells and experience a new era of life in Gaol as they move through the building.

Descend into the dungeon and see the torture methods; climb aboard the replica transportation ship for an agonizing journey to Van Diemens Land; wander through the cells and meet the notorious protagonists of the 1798 rebellion and experience the overcrowding of the famine era, ascend into the Irish War of Independence and Civil War when Wicklow Gaol finally closed its doors as a prison for good.

But not all of the prisoners left!  Learn why Wicklow Gaol is world-renowned as Ireland’s most haunted building…

The new experience also includes audio handsets in four languages, interactive points for children and a genealogy room where Irish and overseas visitors can research their ancestry.

The new multimedia transformation at the Gaol coincides with the launch of some unique events including new teams of overnight paranormal investigators, sleepovers in the cells, Birthday parties, anniversaries and events for other special occasions.