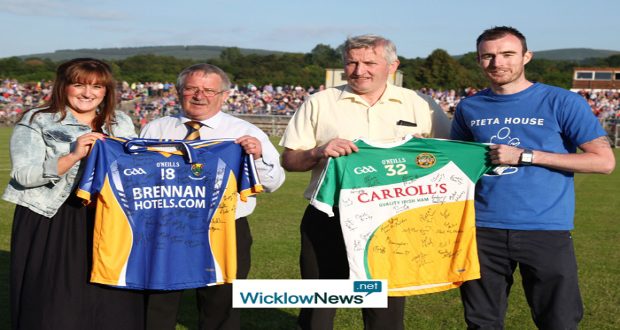 Two Dublin brothers who have started an ambitious fundraising venture in memory of their sibling who took his own life three years ago were in Aughrim on Saturday evening.

The brothers, from Coolock, aim to collect 32 signed county jerseys and one from London and America. When the get all the jerseys they will auction them off, with all the proceeds going to Pieta house.

At Aughrim, they received a signed county jersey from Wicklow and Offaly during the ALL-Ireland Qualifier match between the two county’s.

Speaking about the fundraising campaign Ian Kinsella said that they decided to have a G.A.A themed event because their brother was a passionate Dubs’ supporter.

“Jonathan followed the Dubs around everywhere,” stated Ian. “He went to all the away matches in the league, and used to bring me with him. He brought me to my very first Dublin game.”