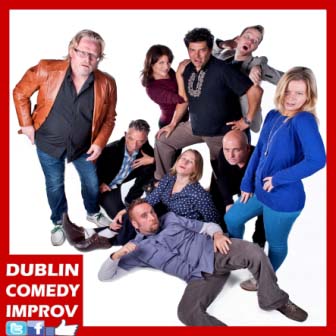 Dublin Comedy are the longest running-and funniest- improve show around! The show is entirely based on audience suggestions and is guaranteed to be ‘absolutely amazing’ and ‘hilariously funny’ according to Hot Press.

They have toured worldwide with cast members of the Simpsons, Never Mind the Buzzcocks and Whose Line is it Anyway. Their line-up is made up of acclaimed comedians, actors and writers who have been working together since the dawn of time to bring their spur of the moment, whip sharp ribaldry to enthusiastic audiences. Four members, Danny Keogh (Republic of Telly, Moone Boy), Paul Tylek (Roy), Kevin Gildea (The Works) and Michelle Reed (whos’s not on telly, but likes watching it) will perform at the Courthouse. This is comedy play time with the grownups!