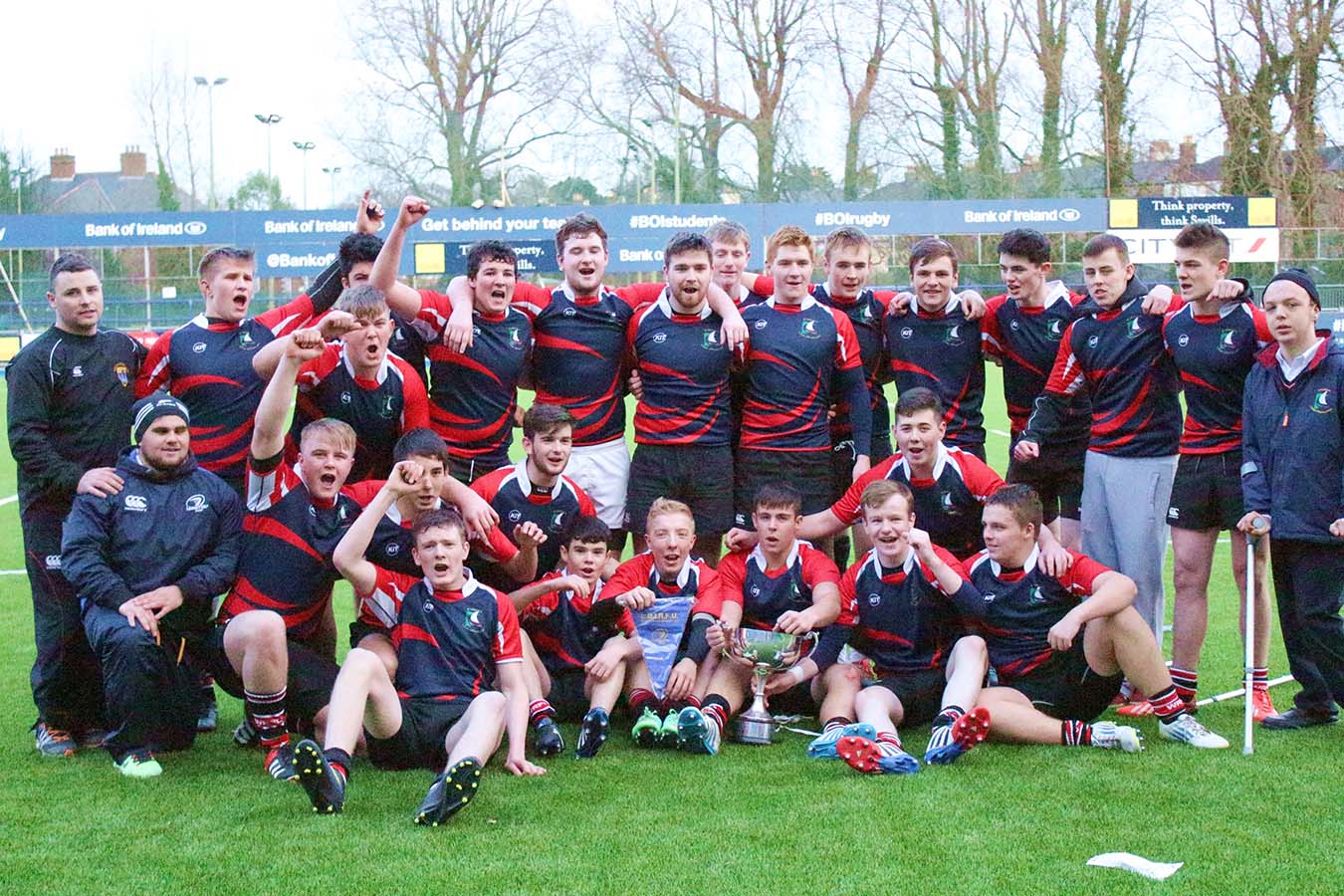 It took all of 140 minutes for Colaiste Chill Mhantain to break away from the clutches of Dundalk Grammar in a superb Leinster Schools Senior Development Cup final replay at Donnybrook on Monday. Just like the original fixture last week, a 28 all draw, there was little or nothing between these two committed sides in the replay as they played with aggression and cohesion.

Dundalk settled much quicker than CCM and from their first attack scored the opening try off the back of a solid scrum. A slick backline move aided by an unfortunate slip by CCM centre Stephen Acres saw Dundalk breakthrough to score under the posts and lead 7 nil.
CCM struggled to get a foothold in the first half as wave after wave of Dundalk pressure led to missed tackles and line breaks. Some heroic last ditch tackles from Stephen Acres, Fergus Ward and Ronan Mannion kept Dundalk at bay as the Wicklow men struggled to match the first half display of the previous week.
Despite the intense Dundalk onslaught CCM kept in touch and were rewarded with an excellent team try which was finished by winger Cal Connolly. The try came from a lineout deep in the Dundalk half. David Nicholson found Fergus Ward in the middle of the lineout which allowed Mark O’Reilly feed the back line. Quick ruck ball from a Ben Fleming carry found its way to Cal Connolly who beat the cover defence to slide in to get CCM back on track.
However, CCM showed their Achilles heel in dealing with kick offs, an area which had caused problems in the drawn game. Dundalk forced a turnover as CCM attempted to clear their lines and after a number of phases inside CCM’s 22 their influential number 8 barged over to reclaim the lead. The conversion was missed and CCM trailed 12 – 5 with 5 minutes of the first half remaining. To their credit they fought their way back into Dundalk territory and after a series of pick and go’s from front rowers Stefan Nixon, Aoron Byrne and Tim Rahill, a penalty was awarded which was converted by David Nicholson to keep CCM in touch at half time with the score 12 – 8, despite Dundalk dominating territory and possession.

The second half saw a different Wicklow side take the field as they took the game to Dundalk inspired by half backs Mark O’Reilly and Alex Porter. The forwards began to carry strongly with substitutes Jay O’Neill and Cillian Ballesty making a big impact off the bench. After a period of sustained pressure CCM took the lead. A strong carry from wing Shaun Humby resulted in apenalty that was kicked to the corner. In similar fashion to the first try, CCM won the line out from the excellent Ronan Mannion allowing Stephen Acres to set a target in the middle of the field. After a number of strong forward carries the Dundalk defence were at sixes and sevens which allowed Alex Porter float a skip pass into the hands of Cal Connolly who made no mistake touching down in the corner. CCM were ahead 13 – 12.
An injury to Stephen Acres meant a reshuffle with Ronan Mannion moving to the centre and Daragh Kavanagh returning to the second row with both players having a big impact on the remaining 20 minutes. CCM showed great spirit to take control of the game. From inside their own half a quick tap by Mark O’Reilly put CCM on the front foot and after a couple of phases the ball found its way to centre Ben Fleming on half way. With very little space he glided between 2 defenders before standing up the winger to dive over under the posts. David Nicholson converted to put CCM ahead 20 -12.
It looked as though CCM would pull away at this stage but to the credit of Dundalk they came straight back turning over the kick off again leading to a converted try and it was a one point game with CCM 20 – 19 ahead.
At this point the game was any bodies as both sides gave it their all. Inspired by the vocal travelling support, CCM laid siege to the Dundalk line. Carry after carry was made as Mark O’Reilly directed traffic left and right before captain Fergus Ward battled his way past 2 defenders to score next to the posts allowing David Nicholson to convert and CCM went into a 27 – 19 lead. CCM were not finished and from the kick off won a penalty which was kicked into the Dundalk 22. Ronan Mannion again commanded the lineout providing quality ball for the team. The forwards kept it tight working tirelessly getting the ball to the middle of the field. Alex Porter moved the ball to the blind side where Tom Maguire was waiting to seal the win for the Wicklow lads in injury time.
Dundalk were not finished and scored again as injury time drew to a close to leave CCM champions for the first time on a scoreline of 32 – 24.
In a great day for CCM Fergus Ward climbed the steps of the stand to lift the cup to the delight of the travelling fans who without a doubt made the difference to the committed and determined team.