Hundreds of students decend on Galway for Donegal Tuesday 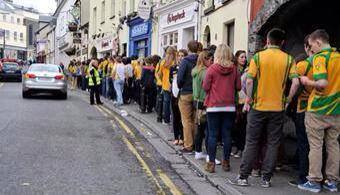 You’d be forgiven for thinking that Donegal were playing an important gealic match today if you happened to be in Galyway city this afternoon.

Hundreds of students, many dressed in Donegal jerseys, have descended on the Hole in the Wall pub on Eyre Street to take part in Donegal Tuesday.

The event, which has now being running for a few years, takes place on the second day of unofficial RAG (Raise And Give Week) week and sees students heading for the famous pubs dressed in Donegal shirts.

Although many students take part, Neither NUI Galway or GMIT have recognised Donegal Tuesday as an official college event after advice from local authorities.

Queues formed outside of the pub from as early as 10.30 this morning as students waited to take part in the festivities. It is also believed that students from outside Galway have travelled to the City to take part on the event.

The event, which is trending on Twitter, has received mixed reactions. One user said it was a “great event and February was a designated drinking month”, while another user from Donegal said the event was a mockery of the county and had nothing to do with Donegal.