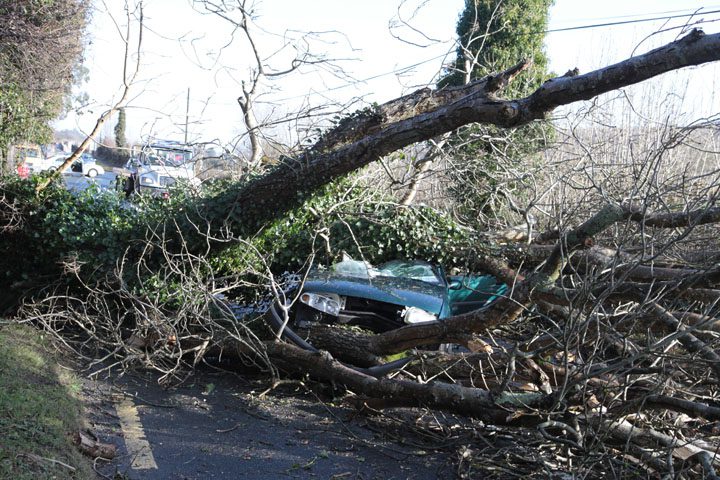 A Rathdrum student has settled his High Court action for €3.75 million after being left blind and suffering from brain damage after a tree fell on his car in 2010.

Julian Kara, (24), was travelling home from college when a tree fell on his car on the Glenealy to Rathdrum road. Mr Kara was trapped in the car and is only partially sighted in the other eye, the court heard.

Mr Kara, who was 19 at the time, had sued Nigel Kelly,Drumdangan, Rathdrum and Wicklow County Council as a result of the accident. The court head that here was failure to properly maintain, prune or lop the tree so as to ensure it did not become top heavy or dangerous and to prevent it toppling over. 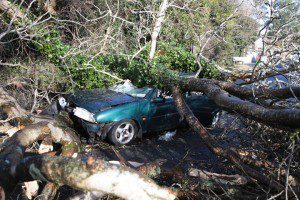 Mr Kara was left trapped in his car for over two hours (Pic.Michael Kelly)

It was also further claimed that ‘there was failure to take necessary precautions or adequate care of a tree within close proximity of a public road to ensure it did not represent a serious danger to the public’.

The court also heard that the council allegedly didn’t have proper rescue equipment in the circumstances and also didn’t provide proper training for members of the emergency services using chain saws and other tree cutting equipment.

Speaking on behalf of Mr Kara, Richard McDonnell SC, told the court that it was a “most unfortunate” case.  Mr Kara was a  multi-media student at the time and the court heard he would in all likelihood ‘never work again’.

Both the land owner and the council denied the claims but Mr Justice Cross approved the settlement and wished Mr Kara all the best in the future.

He also approved a settlement of €600,000 against Wicklow County Council and commended Mr Kara’s parents for the ‘extraordinary’ care they had given their son since the accident.