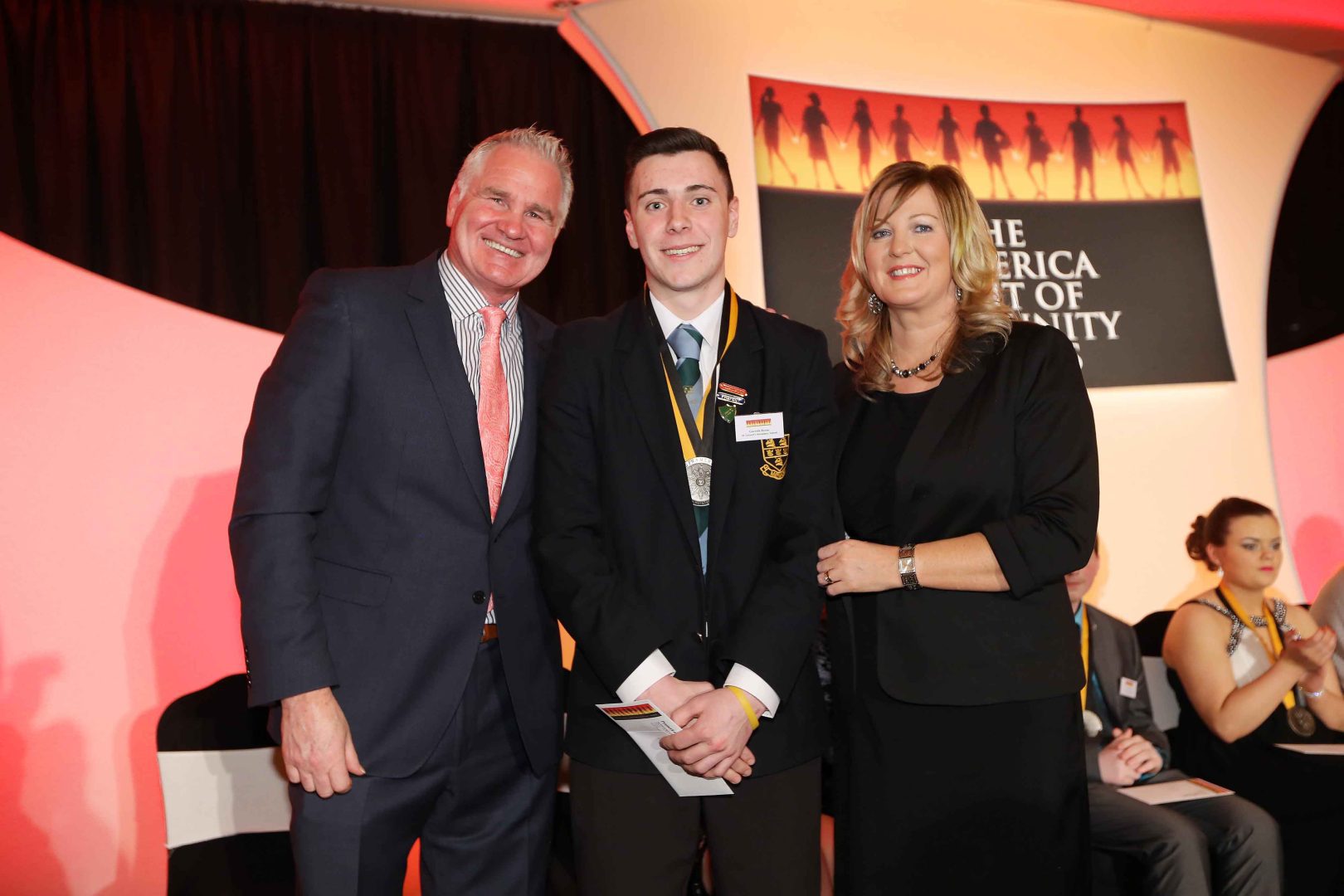 Garreth Byrne from Bray, Co. Wicklow has been selected from amongst hundreds of youth volunteers from across the island of Ireland to receive an award in recognition of the exemplary work he carries out in his local community at the 2015 Pramerica Spirit of Community Awards.

Receiving €500 for a charity of his choice and a gold medallion from guest of honour Brent Pope, Garreth said he was honoured to be recognised at the awards. A sixth year student at St Gerard’s Secondary School, Co. Wicklow, Garreth has been a keen volunteer with his local St. Vincent de Paul for a number of years.  Garreth’s interest in the charity was sparked in school, where each year, a junior conference is held to encourage students to work with the charity.  This passion was further influenced by the knowledge that Garreth would be helping those within his local community, as well as the fact that his father had also begun to volunteer at a similar age.

In the 2013/14 academic year, Garreth was appointed Chairperson of the school’s junior committee for St. Vincent de Paul, during which he led a number of charitable initiatives.  At Christmas, Garreth successfully oversaw the packing of hampers by 85 younger students and later liaised with older volunteers and drivers to organise their delivery.  This was cited by Garreth’s teacher, Ciara O’Connell as his “major achievement” during his time in the post.

That said, in his time as chairperson, Garreth also coordinated the Annual Nappy Appeal, collecting over 150 packets of nappies to donate to low-income families, as well as establishing an entirely new annual campaign, the ‘Stationery Appeal.’  This involved collecting back to school supplies from local junior schools enabling the charity to help parents with the added cost of their children returning to school after holidays.

The only all-Ireland youth initiative of its kind, the Pramerica Spirit of Community Awards programme recognises young people for their motivation, service and impact on their local community across the island of Ireland.

Speaking at the awards ceremony, Brent Pope said, “All 20 finalists tonight have been truly inspiring. I know first-hand the dedication and commitment that volunteering requires, and it is an honour to be able to acknowledge these young people who are continually giving back to their communities.”

The programme runs in partnership with The National Association of Principals and Deputy Principals (NAPD) and The General Teaching Council for Northern Ireland (GTCNI), which recognises outstanding acts of volunteerism by Ireland’s youth.

Congratulating the finalists Andrea McBride vice president, Pramerica Systems Ireland said, “The awards give us the opportunity to acknowledge the extraordinary youth ambassadors who are actively making a difference in their communities and tonight’s 20 finalists are no exception. Their stories are truly remarkable, especially those of Michael and Sophie who have proved to wonderful role models and inspiring leaders of the future.”