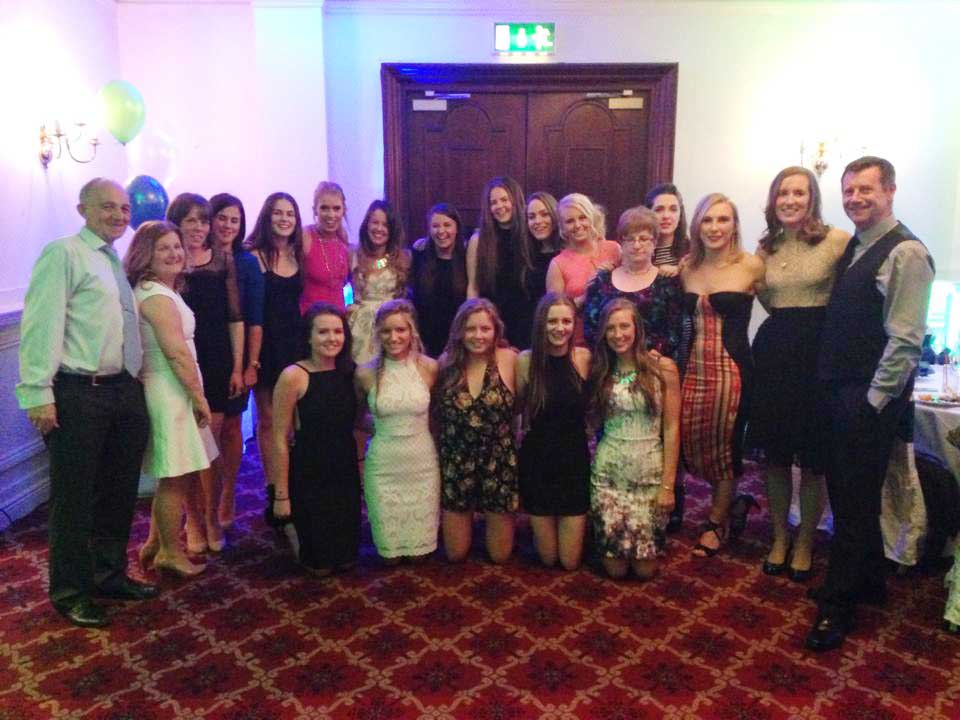 There was one  €25 Lucky Dip  winner, congratulations to Raymond Donohoe

A great night was had by all at The Royal on Friday night. Many thanks to all those  who organised such a great evening.  Have a look at our Facebook page for photographs from the night.

On Saturday morning,  25th Aril, Bray Emmets where delighted to be the start and finish line of the tour of Wicklow cycle series. With a great turnout of cyclists embarking on Pairc Emmet Bhre from 7.30 in the morning travelling from far and wide. The first round of cyclists left at 9am sharp but a beautiful morning in Bray turned suddenly into a cold and very wet cycle.

The weather played a big part in this Wicklow leg of the Skoda cycle but Bray Emmets were delighted to be able the offer riders a nice warm and cosy club house and some hot, well-deserved showers to return to.

Congratulations to all who took part and the organisers for such a well run and organised event.

The men’s Junior football team are back training on Wednesday evenings at 7.15 pm and Sunday mornings at 10.00 am, in Old Conna. Anyone interested in playing is welcome. come to training or  contact Ian Smith 086-85157232 for further details.

This year Bray Emmets are entering a team in the Wicklow Adult Camogie League. it will be the first time in 35 years that the club has fielded an adult camogie team.

This is a great opportunity to capitalise on the fantastic progress that has been achieved in the past 7 years. If you would like  to take part in this great  adventure please contact camogiebray@gmail.com. Training is every Wednesday 7.45-9pm on 3G.

Dates for your Diary

The U16 team traveled to Rathnew last monday evening for their 2nd match in the county league. They never really got out of the blocks in the first half and trailed 1-9 to 0-2 at half time despite good first half performances from William Henessey, Ben Kearney and Cian Lohan in goals. However second half goals from Adam Dixon Delahunty and Darragh Rochford and inspired performances from captain William Henessey, Ciaran McKay, Aaron Walsh, Andy Conway and Mark Robinson helped them pull off a brilliant comeback on Rathnew’s home patch.
Well done to the whole team especially as some came straight from playing a basketball match while others were getting out of their sick beds!
Cian Lohan, Tony Jackson, William Henessey (c), Ben Kearney, Joe Phelan, Ciaran McKay, Andrew O’Brien, Aaron Walshe, Adam Dixon Delahunty, Darragh Rochford, Andrew Conway, Ronan McMahon, Shane Slattery, Jordan Temple, MacDara O’Midheach, Mark Robinson.

The Under 14 boys Football team played a very competent Baltinglass, Wed 22nd April. This was our most demanding fixture so far, faced with a physically strong group of accomplished Footballers. David Maloney gave two hundred per cent, Michael Timmons a fervent display in the fullback line and Jack Treacy was involved in a lot of good cohesive inter-play. New player, Nathan Murphy also made a very bright début. Despite our best efforts Baltinglass were worthy winners. Beidh an chéad chluiche eile againn i gceann coicíse.

The under fourteen development football team had their third match in Wicklow last Wednesday against Barndarrig. In sunny conditions Bray settled quickly with Tadhg and Michael playing really well in midfield. Playing against much bigger opponents the forward line of Daniel, Gavin, the two Eoins and Cathal were always dangerous and took their scores well. The backline were fantastic all through with the ever excellent Philip, Rory, Donal and Jamie tacking harrying and blocking their direct opponents to distraction. Aaron playing in goal had a brilliant game.
Level at half time, Bray were under pressure for most the second half. The back line was immense throughout and particularly the tackling of Rory, Philip , Jamie and teak tough Donal was very encouraging for the coaches. The midfield of Tadhg and Michael ran themselves to a standstill. The forward line of the now injured Gavin, the ever sharp Daniel, the two Eoins and the hardworking Aaron kept working all the way through. In the end the strength of Barndarrig won through for a hard fought win.

Special mention to Cathal who played in goal in the second half, he made a number of top class saves and a calming influence throughout. While defeat was their lot this was the team’s best performance so far. They were disciplined and hardworking throughout. Apart from one player all the team will be underage next year so they are getting great experience.

Our two under 12 teams were on home ground Monday 20th April against St Patricks of Wicklow.

Our White Team were a bit slow to start off. It took them 15 minutes to settle into the game and some great midfield efforts from Gavin and superb defensive work from Conor M was required to keep us only 2 points behind going into half time. In the second half  Bray looked like a different team on the pitch with all players playing lovely football from defenders right up to the forward line passing and scoring all the way to a great win 7-10 to 3-6.

Bray Emmet’s Green Team too fought their way to a deserved victory in their game against St Pats. Pats started the game in a storming manner and were a number of scores up early in the first half.

They played a quick hand passing game which the team initially found hard to cope with. Bray soon warmed to the task and gradually began to exploit their strong kicking game. The backs made up of Luan, Jamie, Simon and Michael continually fed Art and Tim in the midfield and these ensured that quality ball reached Daniel, John, Quintin, Cathal and Cillian in attack. Special praise should be given to Alex, playing in nets, who in this first half saved Bray on a number of occasions. The team playing with desire and skill finished the half level.

The second half saw the teams swap scores with St Pats continuing their hand passing game and Bray seeking to use both the foot and hand pass. Neither team however could build a commanding lead and with 5 minutes to go the teams were level.

The last few minutes saw Bray firstly go behind by one goal after a fantastic move by Pats. Bray had to dig deep and scored a couple of quick goals the first as a result of a great movement involving all of the lines starting with Jamie now in nets and the second because of pressure put on the subsequent Pats kick out. They then tacked on a couple of points to kill off, what was a super game of attacking football.