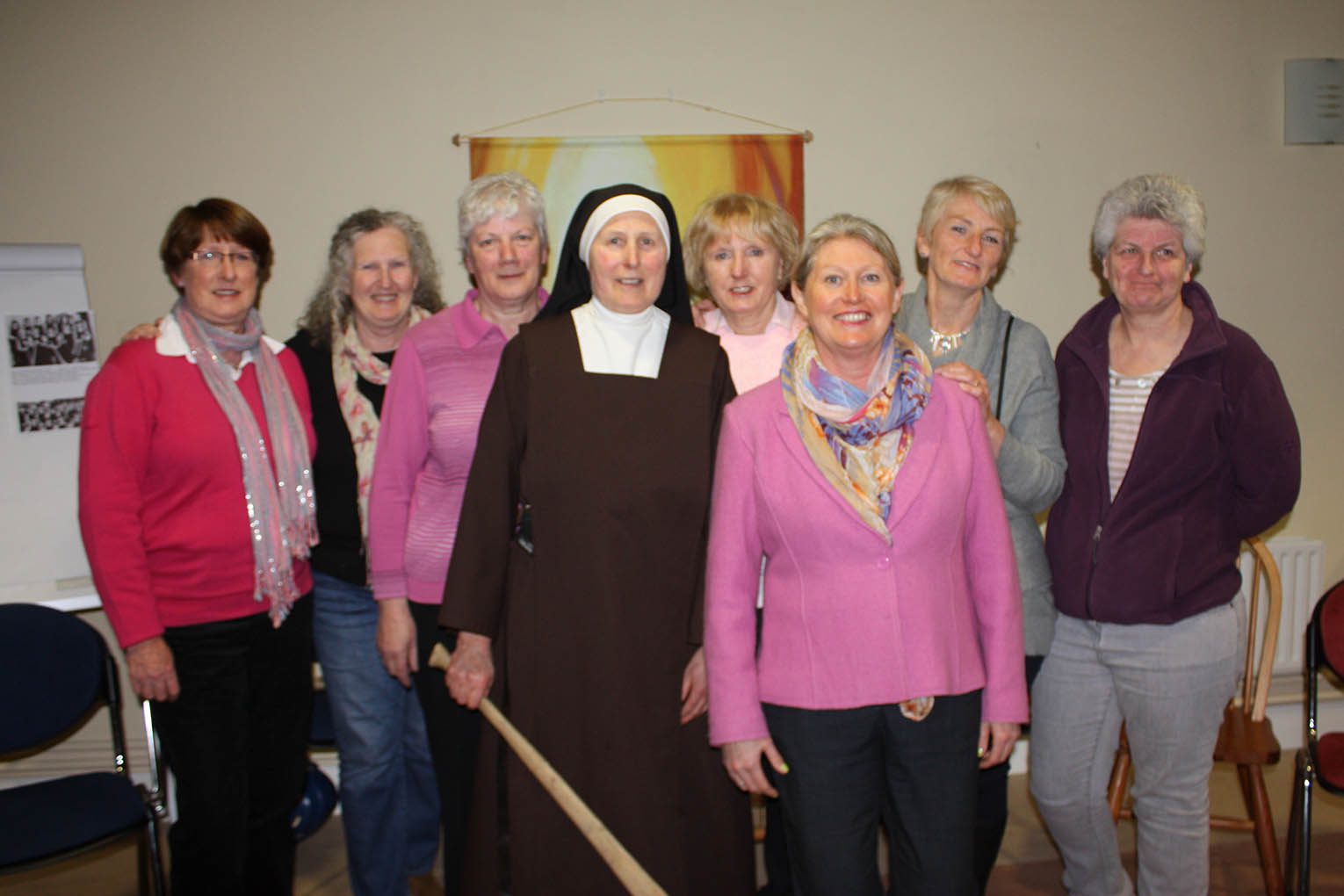 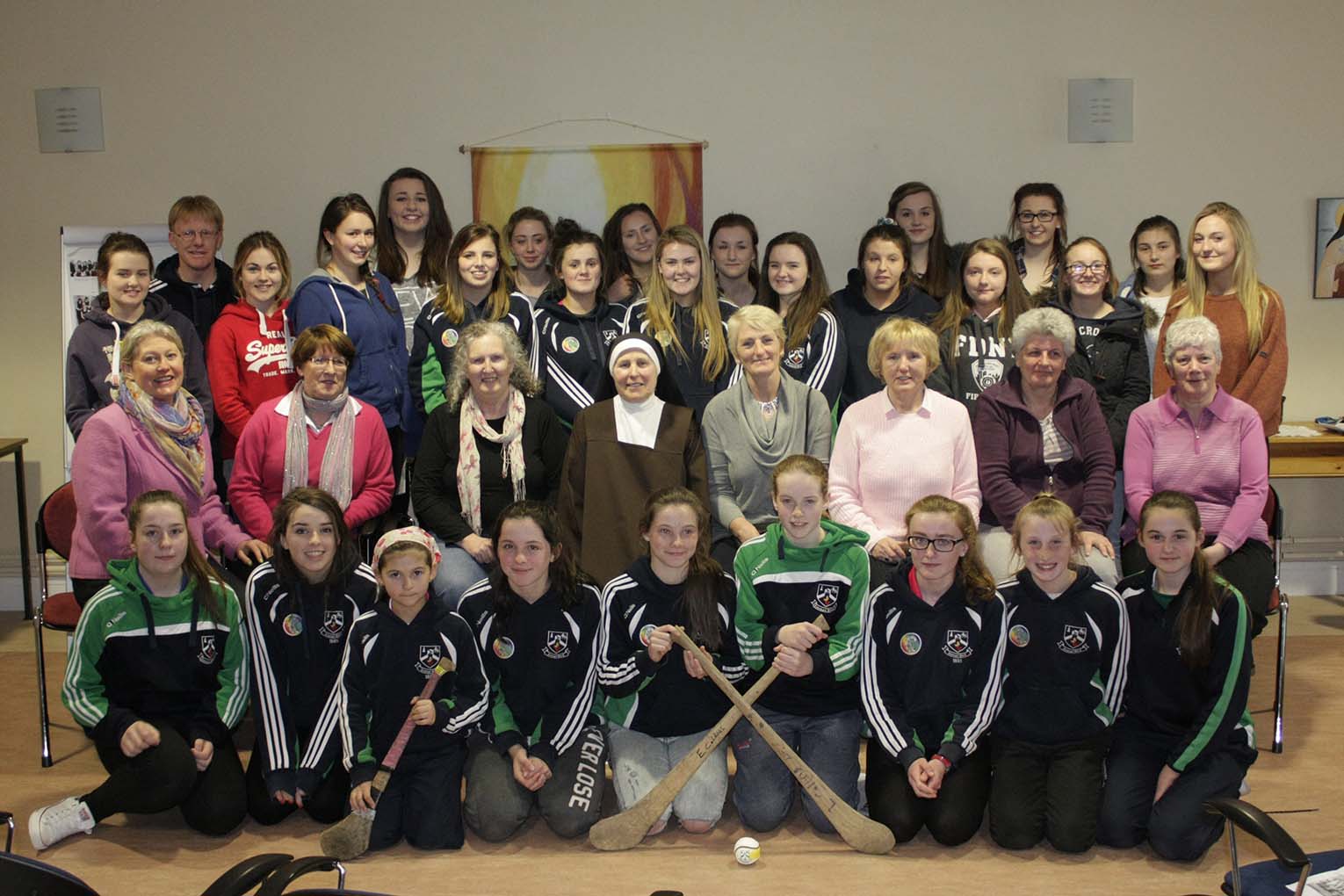 A few weeks ago, the Emmet Bhré camogie section received an invitation from Paul Sweeney to join him on an adventure whereby we would visit with some of the ladies who had enjoyed senior County success in 1972 and 1974.

The location for this meeting would be the Carmelite Monastery in Delgany where one of the key players in 1972 and 1974- Gwen Collins now Sister Gwen- is a nun in an enclosed order.

27 girls from all age groups ( junior/minor right down to Emily Ryan from the u10 squad) and a smattering of parents , mentors and club officers joined Paul for this journey. A historic, unique and moving event followed where the camogie players of today met with those of yesteryear.

Paul opened the proceedings by thanking Sr Gwen for inviting us to the convent. Paul had been aware of Sr Gwen’s involvement along with her sisters – Nora and Audrey- and parents – Lily and Bernie.

The point of the evening was to link the present with the past. Nora Collins then spoke to the audience about the team of ’72. Nora was then 10 years old. Lily and Bernie brought the team together in 1970 and they won the senior championship in 1972!

There were no minor or junior leagues in 1972 so it was straight in at senior level.

They first met Dunlavin ( then senior champions) and Bray won. Carol Carr spoke about how exciting the experience was for them. Bernie had kept a scrap book of articles and photos which Nora read from and showed to the girls – you could feel the passion for the game from the way all the women spoke about their experience in the early 70’s!

Lily and Bernie Collins were the main drivers behind the team and by the sounds of things they were an amazing couple. They started from scratch recruiting players and getting sponsorship between them, kitting out the girls and persuading girls to join up – some of them may not have been from Bray but they worked there and were willing to play for the team. In that first year, 7 Bray girls were selected for the County team.

The Bray team was made up of raw talent and determination and women and girls who just went out and gave it their all! Great credit to Lily and Bernie for their training and making it so much fun!

Nora read out a brilliant article from a local paper of the time which recounted Bray’s historic victory over Hollywood in the County final. The match could have been played yesterday given the enthusiasm of the women and how they relived it. I hope and trust that our 2015 girls were inspired by the stories.
Sr Gwen spoke about her community – there are 8 nuns and 5 of them are ‘Dubs’. Sr Monica joined proceedings and Sr Gwen mentioned that she is a cousin of Paul Flynn who plays for Dublin. Gwen spoke about playing in old Emmet Park and about how fit the girls were – most played other sports as well. Lily went around collecting players from the shops and businesses in Bray – she must have been a very persuasive and very determined lady!
The girls drove all over County Wicklow to their matches and found places they didn’t even know existed – they saw places they never would have were it not for their involvement in camogie!

Sometimes they had to drive the cows off the pitch ( and pick up the cow pats) before the match started. With no changing rooms, they got changed in the backs of cars and in ditches. After a match they would often be soaking wet so they would stop in Lawlesses Hotel in Aughrim and get changed and dried out. Sr Gwen made the point that an important aspect was giving everyone a game. She recalled that though there was great competition, camaraderie was uppermost and respect for the opposition was also the order of the day.

Commitment to the team , leadership and decision making were important skills learned from their camogie playing days.

The start of the current camogie section was then recounted by Teresa Mulvanney. Marie Mc Naughton was Games Development Officer and Teresa would go down to the school with her and would help coach the girls. Then Marie got a new job and Teresa carried on alone. She described this mysterious gent showing up who would help her put out the tyres – a strawberry blond…. who else but Paul Sweeney!! At the start – a mere 8 years ago- they had 16 girls ranging in age from 16 to 8. We now have teams at Junior, Minor, U16 , U14 , U12 and U10 and very healthy numbers at Academy Level – overall camogie numbers run to 140

Teresa reminisced about the first games and how lovely it was to see the girls progress and develop under her and Paul’s tutelage.
It cannot be emphasised enough how much the involvement of parents, people giving time, getting out of their comfort zone, etc that all this contributes to the sporting excellence and if not always silverware then well being and sense of community for young persons.

Next up was Captain Róisin Quigley! Róisín thanked the sisters for inviting us and spoke about how hearing the history of the women of ‘72 was inspiring and motivating for the current group .

She also spoke about the great buzz the girls get from training and playing together.

She said that knowing about the women of ‘72 and what they had achieved would act as an inspiration for her and her team and would embolden them.

Paul wrapped up by talking about plans for developing camogie in to the future and creating what he called a camogie community and how great it will be if all the girls retain the friendships of today into the future.

He then persuaded Sr Gwen to tell us how she ended up as a Carmelite nun in a monastery in Delgany.
Gwen went on to describe a very busy life indeed from a child in St Patricks and on to Loreto and then studying to be a PE teacher in Limerick.
She taught for a few years in Pres but had always wanted to go to Australia since she was about 4 years old. So off she went and backpacked around the world winding up in Perth in Australia. A chance visit to a Carmelite monastery in Perth one rainy Sunday after Mass revealed to Gwen that there was a Carmelite monastery in Delgany. Some time after her return to Bray she visited with the nuns there and she is still there today!!
Back to the present

The first match for the current Junior Team will be in Aughrim in April and sounds like we may have some additional supporters after this event.