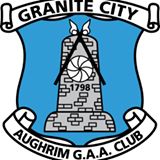 Our Senior League Division match against A.G.B. last week was cancelled as a mark of respect due to the unexpected sudden death of former player Niall Moles. Nial played with Aughrim under age and was a prominent player on the Aughrim Under 14 hurling team that won our first County Feile competition in 1981. The Club would like to extend its sympathy to the Moules family.

The Club would like to extend its sympathy to Patty Keenan on the death of her nephew.
Our next Senior League fixture is next Saturday at 5 o’clock against Baltinglass at home.
Congratulations to the Aughrim players – D. Owens – captain, D. Keegan, S. Doyle, A Keegan, O. Dillon & J. Toomey who played a vital part on the Avondale Community College team that won the division 2 schools final recently.

Derry Gaels Under 14 football team will be taking part in the All Ireland Feile in Wicklow on the weekend of 26th June – there are a number of Aughrim players on this team.
Fund raising for the Luke O’Tooles under 14 Feile hurling team who will travel to Down for the All Ireland Feile is ongoing. A number of these players will be running The Rock for this event – please support them.

Aughrim Juveniles
The U12 Hurlers chalked up their 3 win on the trot away to Kilmacanogue over the bank holiday weekend. They played some excellent hurling to beat a big Kilmacanogue team.

The U12 Footballers came away from Carnew with their first win if the season, they have slowly got to grips with the Division 2 league and should continue to improve over the coming weeks. Well done to all the U12 players in both codes.

The U8’s and U10’s unfortunately had their football and hurling blitzes cancelled in Shillelagh and Kiltegan over the past number of weeks but they did get to play in the football blitz in Arklow over the weekend.

The U10’s won all their games, and have some very good footballers on their team, some of who play on the U12 team. The U8’s also acquitted themselves very well, with the 2 teams having some very close games. Next up is a hurling blitz in Tinahely on Friday night.

Derry Gaels
The Derry Gaels U14 team hosted Blessington in the U14 Div2 league recently but went down on a scoreline of 5-12 to 3-12. The team were flying in the first half and were well on top, leading 3-09 to 1-05 at half time, but on the changeover for the second half to play into the wind, they struggled to score, which eventually lead to their downfall. The team play Newtown in Aughrim on Wednesday at 7.15pm.

Luke O’ Tooles
Having won the County Feile a few weeks ago, Luke O’ Tooles finally got their Hurling league/ championship campaign off the mark last week with 2 games. First up were Glenealy on Wednesday night.

Luke’s were very slow to get in to the game and after 10 min’s play were only 1 pt to the good, with both defences on top, soon after however, Luke O’ Tooles got in to their stride and started notching up the scores, between the 16 and 30 min’s of the first half, Luke’s scored 2-14 to Glenealy’s 1pt, an astonishing one score a minute, with Eoin Darcy scoring 1-11 from play.

The game was effectively over as a contest at half time, but Luke’s kept pushing forward in the second half to win on a score line of 6-22 to 0-01. On Friday night the team headed to Kiltegan to play Michael Dwyers, Michael Dwyers had troubled Luke O’ Tooles in the semi-final of the Feile and it was expected that they would do the same again. The Luke O’ Toole players had different ideas, and they soon were into their stride, when Cathal Hayden struck for the first goal the team powered on and were ahead 7-04 to 1-01 at half time.

It must be said though that Dwyers were strong all over the park, but the Luke O’ Tooles defence were playing as a very cohesive unit and were able to close down a lot of the Dwyers attacks, while at the other end Luke’s were able to get some very easy goals. The second half was more evenly contested with Luke’s only managing 3 pts to Dwyers 4 pts – final score 7-07 to 1-05.

Preparations are well on their way for the Feile Final’s in Ulster. The team is staying in Carryduff Co. Down,on Fri and Sat 19th and 20th June and should they progress to the Semi-final, will travel to Gervaghy in Co. Tyrone on Sunday. Conor Connolly our U14 goalkeeper won a coaching session with Ger Cunningham a few months back. Ger is now a very busy man, managing the Dublin hurling team, however he has kept to his promise and will coach the U14 team on Monday night. We hope that the players will get a lot out of the session, it should certainly help with our preparation for the Feile.