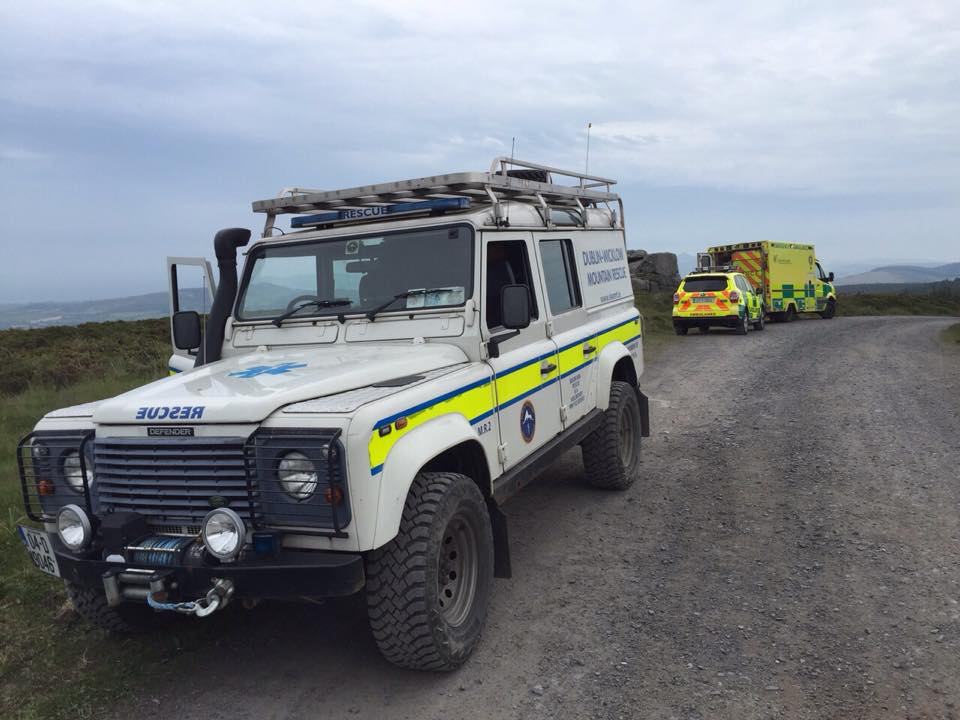 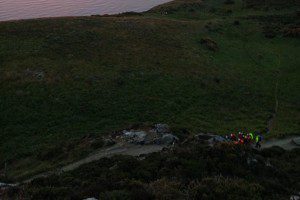 HSE Personnel were also responding and an RV was set up at Raheen car park. Despite the early hour a stretcher party was assembled quickly and went to locate the young casualty who had been camping on Bray Head with a few college friends.

MR Personnel assisted the HSE with her treatment before she could be packaged for the relatively short stretcher evacuation. Other MR personnel also assisted the girls friends down from the summit.The young lady was then transferred to a HSE Ambulance for transfer to hospital and definitive care. The incident was stood down at 05.24.

Thanks to all the agencies involved and to all those who responded at such an early hour. 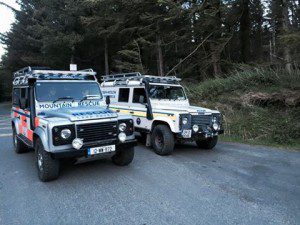 While MR personnel were making their way to Three Rock to locate the man a HSE ambulance was also dispatched to help evacuate the 38yr old casualty.

Communications can be difficult in the area but mountain rescuers located the man who was being assisted down to a larger track by a friend. The injured biker was treated by MR and transported a short distance to the waiting ambulance which then transported him to hospital for further treatment.

A quick response and proximity to tracks meant the incident was stood down in under an hour! Thanks to all agencies involved and all those that responded. 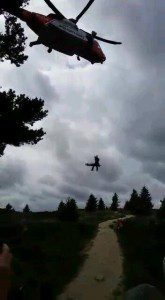 On Monday the 8th of June at about 2pm both the Dublin Wicklow Mountain Rescue Team and the Glen of Imaal Red Cross Mountain Rescue Team were tasked by An Garda Siochana to come to the assistance of a woman in her fifties who had taken a fall while walking on Tibradden Mountain.

Other agencies were also responding to the call and the Coastguard Helicopter had also been tasked. MR Personnel approached the ridge from both sides to locate the woman while Rescue Base was set up on the Glencullen Road.

A passing hillwalker helped direct mountain rescue to the injured lady where they could assist the winchman with the womans treatment and packaging. She was then airlifted and brought to hospital for further care. The incident was stood down at 15.45hrs.

Mountain Rescue would like to thank all agencies involved including the Dublin Fire Brigade, Health Service, Gardai and the Coastguard.

On Saturday the 6th of June at about 19.30hrs both the Dublin Wicklow Mountain Rescue Team and the Glen of Imaal Red Cross Mountain Rescue Team were tasked by An Garda Siochana to help search for a teenage girl who had become separated from her family while out walking near Kippure Mountain.

Rescue Base was set up at the main access road to Kippure but thankfully before the search could begin in earnest the girl was picked up by other MR personnel as they made their way to Kippure. She was then reunited with family members and the incident was stood down.

Mountain Rescue would like to thank all agencies involved including: The Garda Air Support Unit Helicopter who assisted in the search and S.A.R.D.A (Search and Rescue Dog Association) who were placed on stand by to assist.