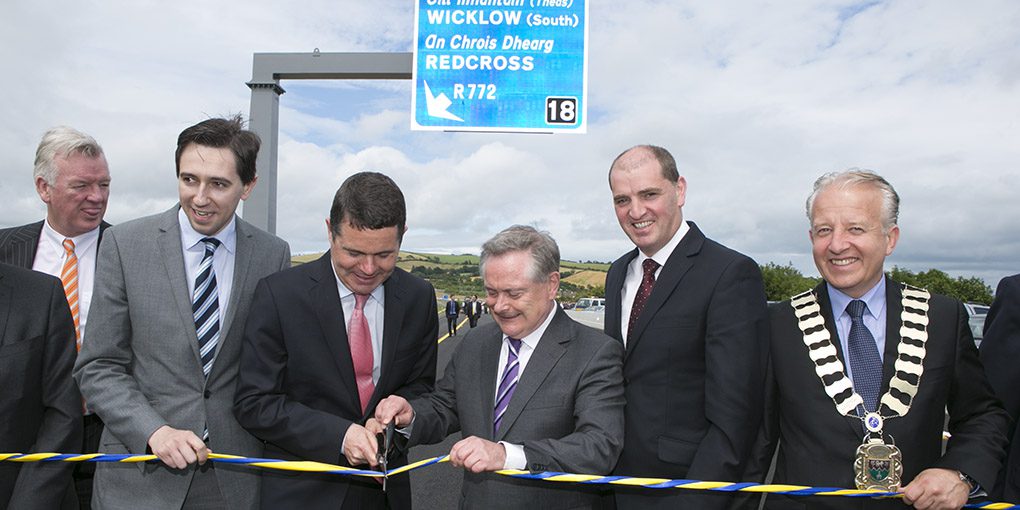 157
SHARES
ShareTweetSubscribe to our Newsletter

The new 16.5km section of the M11 in Co Wicklow which was opened today (Monday) by the Minister for Transport, Tourism and Sport, Mr Paschal Donohoe TD, will remove a series of dangerous bends and provide a safer driving environment for in excess of 20,000 motorists who use the route daily.

There have been a total of 33 fatalities on this section of roadway in the last 25 years.

The Arklow/Rathnew Motorway is the last link in the reconstructed M11/N11 route through Co Wicklow and will reduce journey times by between 10 and 20 minutes.

Its opening today – in the presence of Mr Brendan Howlin TD, Minister for Public Expenditure – means that motorists and other traffic will be able to drive on motorway or high-quality dual-carriageway for a full 90kms from Donnybrook in Dublin city to south of Gorey in Co Wexford.

The construction of the new motorway for Wicklow County Council and the National Roads Authority, which began in June 2013, was completed ahead of schedule by BAM PPP (BAM Civil &PGGM Infrastructure Cooperatie).

As part of the project BAM is also building a Service area on the Gorey By-pass on the M11 and this is due to open later in the year.  The M11, the Gorey Service Area and the upgrading of Newlands Cross in Dublin were part of an overall €282 million contract.

Wicklow County Council began planning for the route in 2004 when the Compulsory Purchase Order process was initiated.   However, a lack of funding delayed construction of the much-needed road improvement.

The Cathaoirleach of Wicklow County Council, Cllr John Ryan, said: “On behalf of the members of Wicklow County Council I very warmly welcome the opening of the M11 Arklow/Rathnew Motorway. This new stretch of Motorway will open up the whole of County Wicklow and allow people to discover the beauty of our Garden County and should also encourage new business opportunities within Wicklow. I would like to thank everyone involved in getting the road to completion including the contractors BAM PPP and the staff of Wicklow County Council.”

The Chief Executive of Wicklow County Council, Mr Bryan Doyle, said: “The upgrading of this section of the N11 has been the number one objective of Wicklow County Council since the opening of the Rathnew /Ashford bypass in 2004. A total of eight dangerous bends including the notorious Balinameedsa bends which has been the scene of many bad accidents and fatalities will soon be a distant memory for the main road users of County Wicklow. A total of 33 people lost their lives on the section of road in the last 25 years and today we remember them and their families. I want to wish everyone who travels on this new motorway a safe and happy journey.”

Mr Cormac O’Rourke, Chairman of the NRA, stated: “The Authority welcomes the delivery of much needed improvements along the M11 corridor. We in the NRA believe that the Government’s vision of a radial network of motorways – connected together at the periphery – has the capacity to deliver balanced economic development for the entire country.”

Mr Fred Barry, CEO of the NRA, stated: “Replacing this section of the N11 between Arklow and Rathnew, known for its notorious bends, with a modern motorway will result in significant safety improvements for all road users.”

The M11 is a vital route in the country’s infrastructure linking Belfast/Dublin with Rosslare Europort in Co Wexford.   The new road consists of 16.5kms of motorway; 2 major interchanges, 7 new bridge structures and 12km of associated single carriageway and 4 km of associated access roads

During the construction period some 2,500 people were employed on the project.