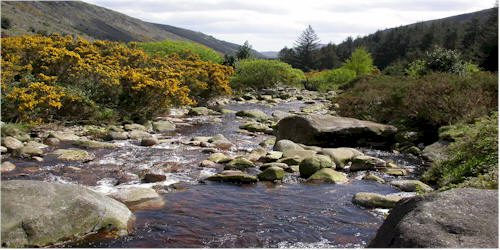 The river crossing at Barravore, Glenmalure

345
SHARES
ShareTweetSubscribe to our Newsletter

A Wicklow family were left terrified after two men were attacked in a tent close to theirs during a camping trip in Glenmalure last Friday week.

The family pitched their tent close to other campers at Barravore.

During the early hours of the morning a group of six men sliced open the tent of the two men and began to attack them.

Both men received stab wounds to the arms and face.

One man managed to escape to his car where he made his way to Loughlinstown hospital, while the other man escaped into the woods then managed to track back to the site and got into the tent of a young family.

He told them a gang were after him and asked could he stay until they had gone.

The men, family or other campers were unable to raise the alarm due to no phone coverage in the area. Hospital staff alerted the gardai.

The gang left the area just before Gardai arrived, the man was then taken to hospital.

One of the campers told Wicklownews “It was like something out of a horror film, only this was real.” the young family who were used to going out camping have vowed never to go camping again such was the terror.

Gardai are continuing to investigate the incident.