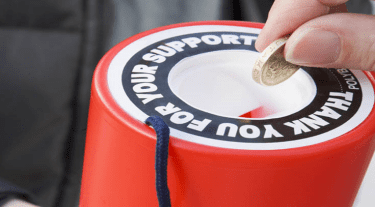 A Dublin business owner has been left shocked after a donation box set up over the weekend to help Syrian refugees was stolen yesterday.

The Little Ass Burrito Bar on Dawson Street was among a number of businesses in the capital that took part in the #DublinForSyria campaign, which aimed to raise money for Unicef’s Children Refugee Crisis Fund.

It is estimated that up to €450 could have been in the box that was stolen at the till after the restaurant had pledged to donate €1 from every burrito sold so customers could match the restaurant’s donation.

Speaking yesterday, Philip Martin, owner of the restaurant, admitted that staff members should have emptied the box sooner but he also said that they were not expecting the box to be stolen.

“We’ve raised money before but it’s particularly on the minds of people right now and people have been very generous towards the emergency drive,

“It’s a shame now but the jar is back out again today and we’ll try to get a few more quid,” he said.

The culprit was caught on CCTV and the footage has been passed onto Gardai, who are investigating the incident, however Mr Martin does not believe that the money will be given back.