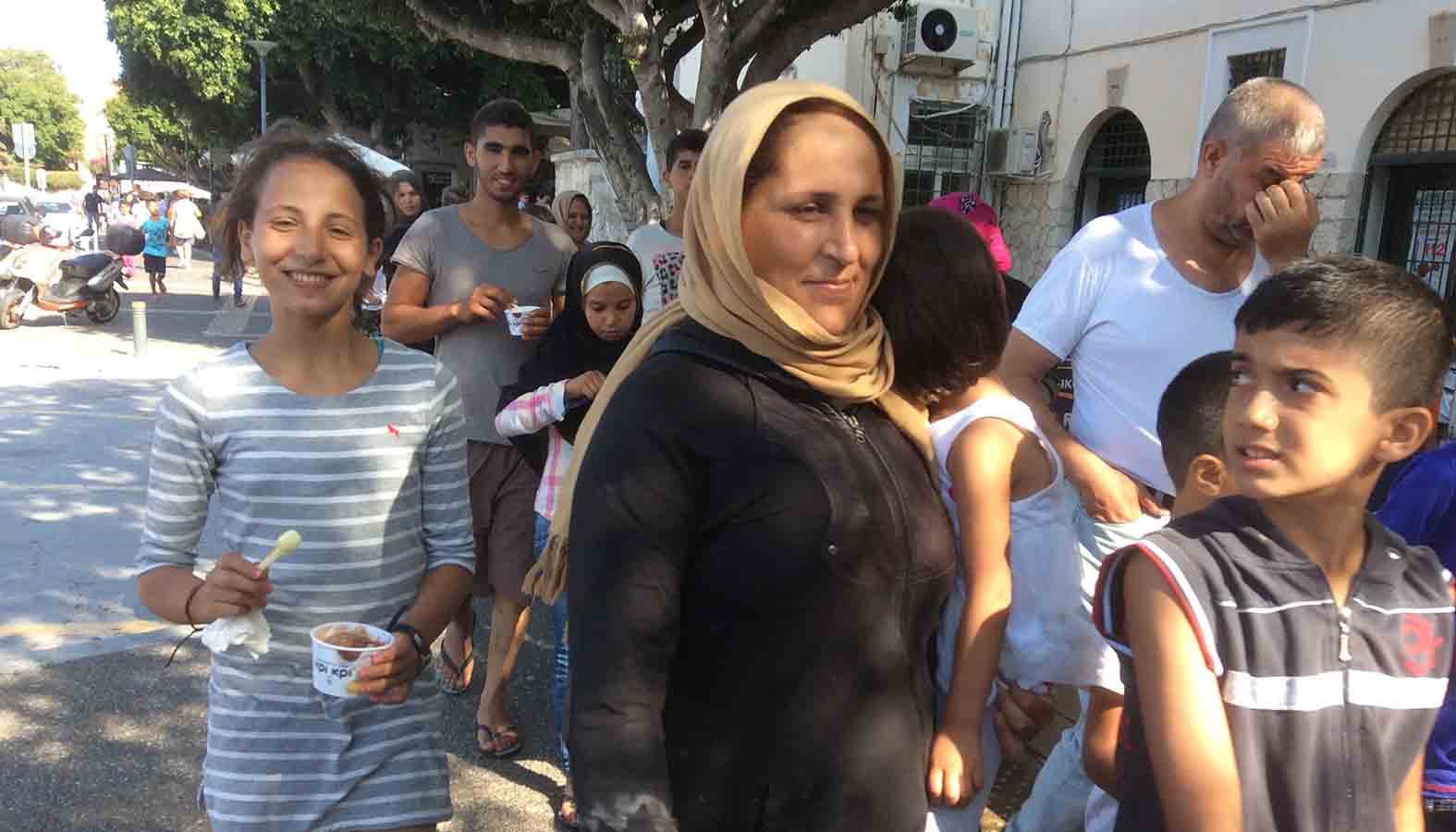 Around about 3.a.m. the refugees start to arrive in their tiny rubber dinghies.  We were down on the beach this morning as they came in and one of the first arrivals was a father from Syria with his 8 year old son.  Timmy told us he had worked for the American army in Iraq as a translator but then after they left, his life was in danger.  His house was bombed and his wife and two year old daughter were killed.  Now he was escaping to a better life with his son.

We cannot believe the endurance of these people.  A couple of days ago, in the police station, waiting to register, was a young Syrian man, probably in his early twenties.  He was just slumped on a chair, listless and pale.  He is suffering from cancer and hadn’t eaten that day.  He had no money with him.  We were able to get him a meal and last night we saw him again as he walked along the harbour wall towards the ferry, leaning heavily on a crutch.  I do not know how he will cope from Athens onwards, how he’s going to survive even in that great rush of able-bodied people.  This migration is very hard for anyone with a disability.  We met a family this week and one of their children, a small boy, was deaf and blind.  The parents were reassuring him and hugging him as he sat unsure of his surroundings.

Shoes, or the lack of, are a huge problem.  Most people seem to wear flip flops or sandals when they arrive but that won’t get them very far when they reach Athens.  Yesterday we had an emergency call for a man with very large feet and every shop we went into took one look at Brian’s feet and said no, no, far too big for you!  It’s hard to explain that they’re actually for someone else!  Rucksacks are also very much in demand, we found a great range yesterday in an outlet shop for just €8.50 so that helped a few families who had all their possessions in a few plastic bags!  You might wonder why they have so little with them.  Well, one of the problems is that the traffickers have a nasty habit of throwing the refugees’ luggage overboard in order to make room for more customers.  We have also heard of traffickers driving the refugees to the boat and then ordering them out and keeping their luggage.

It is heartbreaking to meet so many families with small children who arrive with nothing, no food, no nappies, no clothes and I just wonder how I could have coped in these conditions.  One mother arrived yesterday with seven children and two teenage nephews.  Four of the children were her sister’s but she had disappeared in Syria.  Now this wonderful woman was trying to take them all to a better life in Europe.  They were in such a bad state that a local charity paid for them to stay a night in a hotel.

The food situation will improve this evening!  The hot food run stopped last weekend when the German volunteers running it went home to Germany.  But yesterday two marvelous women arrived from the UK and we joined forces, along with a couple of people from Kos Solidarity.  So tonight we will be delivering  800 hot meals!