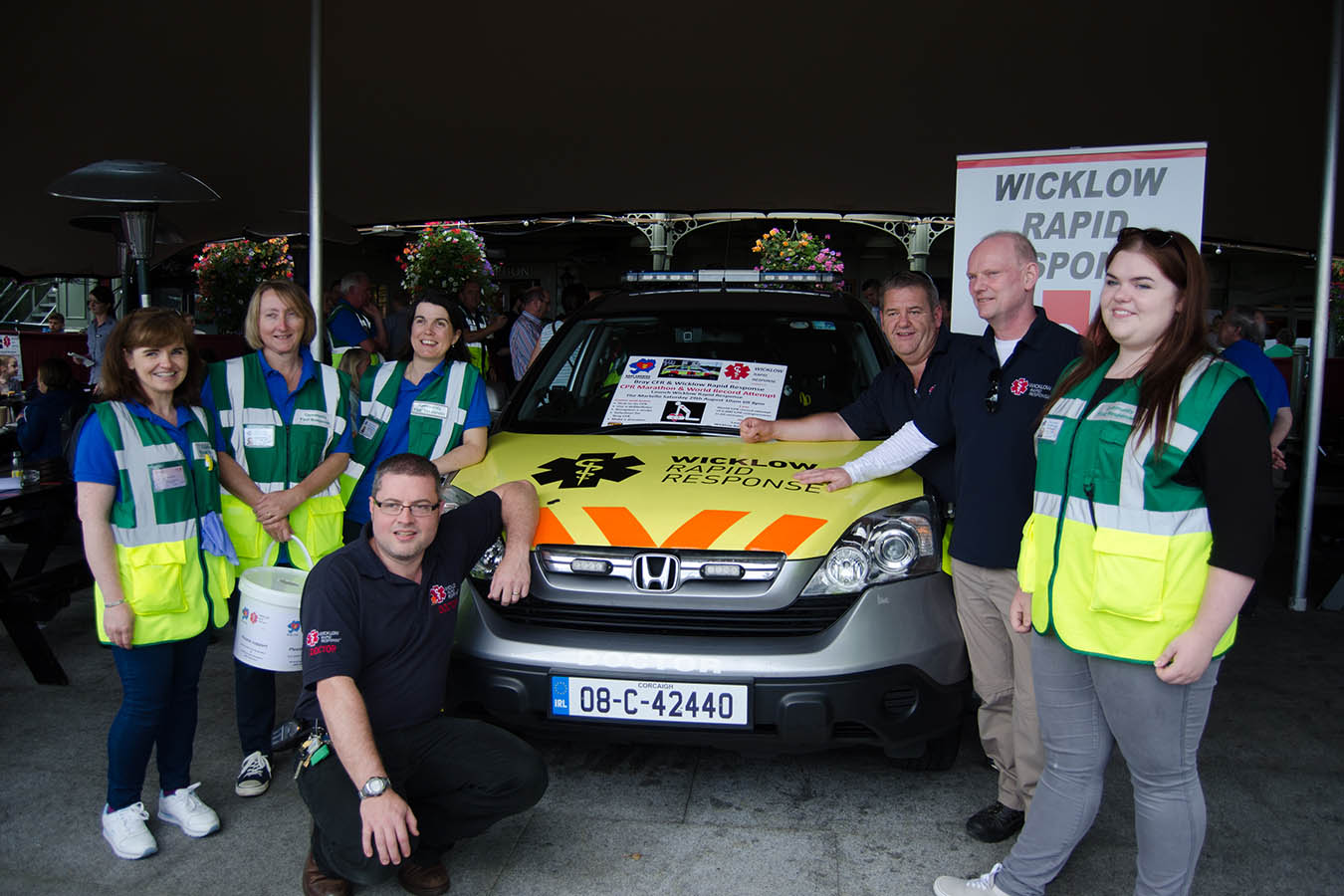 402
SHARES
ShareTweetSubscribe to our Newsletter 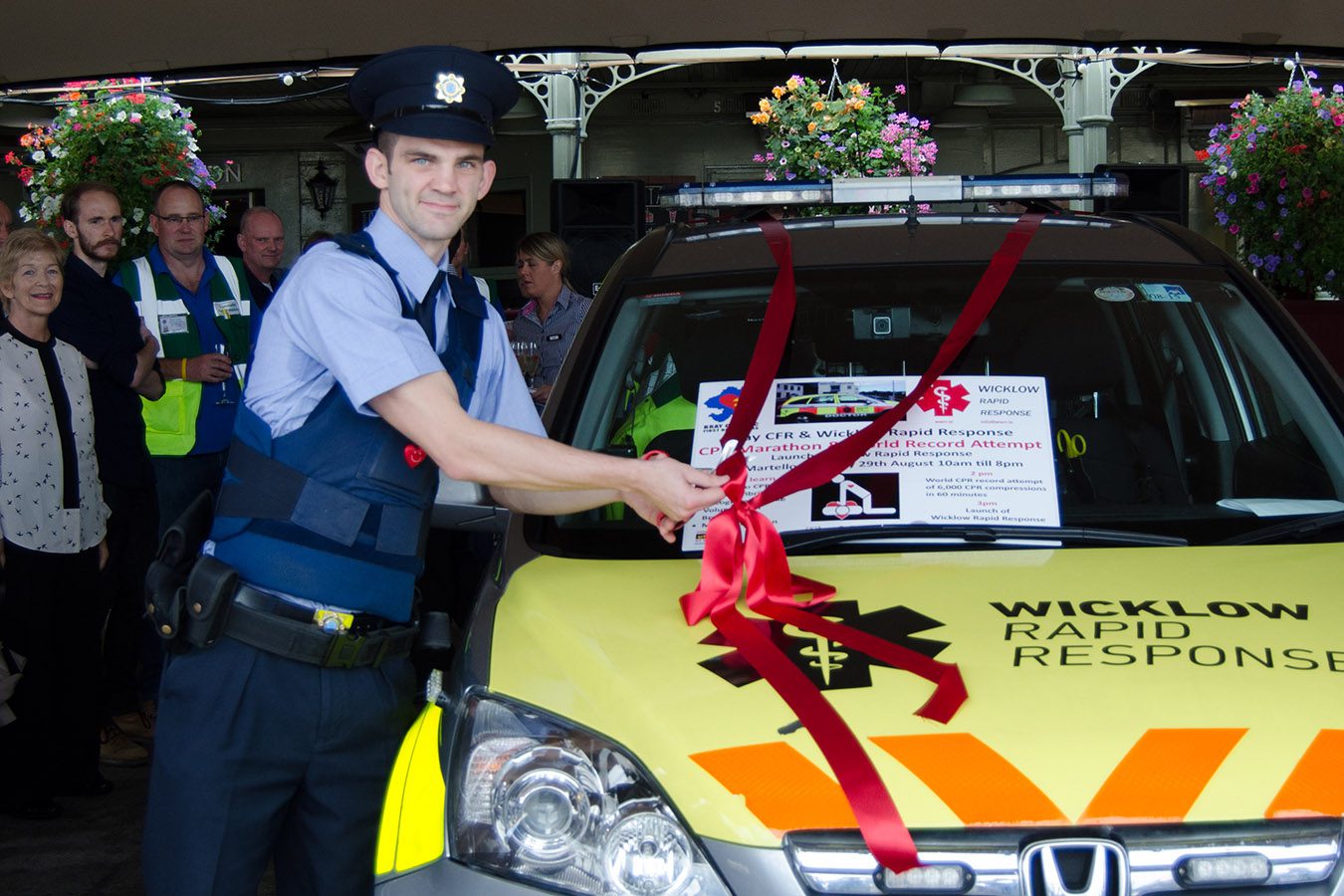 Garda Adam Nolan officially launched the voluntary doctor led service for County Wicklow on Saturday last at the Martello Hotel Bray.
The launch of Wicklow Rapid Response took place in conjunction with a CPR marathon, and World CPR record attempt being hosted by the volunteers of Bray Cardiac First Responders.
Wicklow Rapid Response Doctor
Staffed by volunteer Doctor David Menzies who is a Consultant in Emergency Medicine at St. Vincent’s University Hospital. He also has an academic commitment to the Paramedic and Advanced Paramedic Training Programmes at University College Dublin Centre for Emergency Medical Science in partnership with the National Ambulance Service. Dr Menzies responds in his own time from home and also from work when circumstances allow. He is one of only 5 doctors on call to the National Ambulance Service country wide and the only such doctor in the east of the country.
Calls for assistance from WWRR come either directly from NAS control in Tallaght or from the crews already on scene where they have identified a need for specialist assistance.
Wicklow Rapid Response (WWRR)
Wicklow Rapid Response (WWRR) is a voluntary group working in partnership with and supporting the existing Emergency Services. Our Rapid Response vehicle and volunteer doctor is a declared National Ambulance Service Asset and is called simultaneously with the state services when a serious emergency occurs. Our team voluntarily supports their community by responding to these life threatening emergencies in a manner similar to the civilian CFRs and also affiliated to the parent organisation Irish Community Rapid Response (ICRR, www.icrr.ie).
ICRR teams nationally work with and compliment all front-line emergency services including the National Ambulance Service (NAS), the Coast Guard, the Fire Service, the RNLI and the Air ambulance which is run by the Air Corps and National Ambulance service. Irish Community Rapid Response aims to put the right people in the right place at the right time with the right equipment and the right skills to achieve the right outcome.
We aim to provide near Intensive Care level treatment for rural communities in the pre-hospital environment in life threatening circumstances by volunteer emergency medical personnel; an Ireland where lives are saved regularly by maximising existing resources in rural areas to facilitate in-time response to emergency trauma events. Ireland has a significant rural population in areas where emergency services are already thin on the ground with limited hours of service, and these limited services are being cut back. Emergency services can take a long time to get to critical emergency events depending on the distance between the ambulance dispatch location and the person in need.
Ambulance care teams have a “ceiling” in terms of the levels of care they can administer when they arrive at the scene of an emergency. On occasion, advanced critical care interventions from a trained specialist physician can be lifesaving. These interventions can include: advanced drug therapy and analgesia, critical procedures including general anaesthesia and roadside surgery.
Our aim is to develop a volunteer model of pre-Hospital emergency medicine in Ireland by using physicians supported by communities working under the NAS. There are times in parts of Ireland where it can take over one hour transport time to get a patient to a centre of excellent emergency department, our aim is to maximise resources in the community complementing the existing pre hospital care existing services.
Currently, there are 2 regional teams, namely West Cork & East Cork Rapid Response. All ICRR teams are equipped to provide specialist care as per the standards set down by the Association of Anaesthetists, the Prehospital Emergency Care Council and the clinical guidelines of the National Ambulance Service.
These teams are made up of medical and community volunteers, both of which are critically important in ensuring a well-run, locally based, sustainable organisation. ICRR’s central goal is to assist community and medical volunteers develop their Rapid Response team in their own area of the country through organisational, training and logistical assistance.