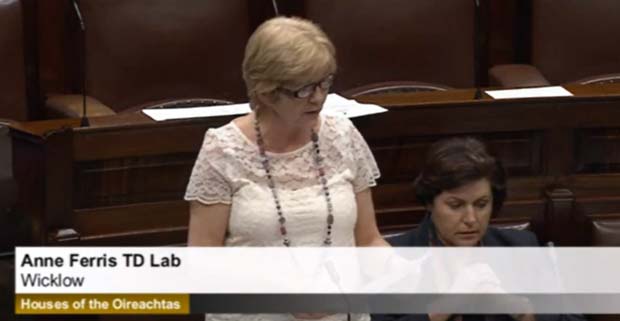 “The purpose of this Bill is to amend the Employment Equality Act of 1998 to abolish mandatory retirement ages for persons able and willing to continue in the role for which they were employed” explained Anne Ferris, clarifying further that the Bill provides certain exceptions for security related areas such as An Garda Siochana.

“This is not a new idea. Compulsory retirement ages have been outlawed in the US since 1967 and in the UK since 2011” said Deputy Ferris. My Bill aims to change the situation that arises in many workplaces across the country at present, particularly in State roles like the HSE, where people attaining a certain fixed age, be it 60 or 65 are compelled to retire, often against their will.”

“This Bill also will also address the growing anomaly whereby people are retiring at 65 but have to wait a year or longer to receive access to State pensions. The idea of signing on for the job seeker’s allowance after working for nearly half a century is abhorrent to many employees and is frankly in my eyes an unacceptable request by the State.”

Thanks to improved nutrition and advances in medical science – the fact is that we are living longer. How often do we hear that ‘fifty is the new forty’ or ‘sixty is the new fifty’? Today’s celebrity role models are often women and men aged over 65 but as youthful in outlook as someone decades younger. The generations are blurring. In many respects there is no longer a generation gap – or not a discernible one anyway. The recent Marriage Equality Referendum in this country demonstrated a shared open-mindedness across several generations.

But the really disappointing thing is that this wider movement towards a more age respectful society does not seem to have embedded itself in the culture of employment, particularly in the State Sector.

When I initially published this Bill back in April 2014 I discovered fairly quickly the popularity of removing upper age limits from employment contracts. I was quickly inundated with emails and letters from members of the public, praising the Bill, but also sharing with me their own stories of age discrimination. The number of people out there who have suffered both emotionally and financially through being forced out of their jobs prematurely is quite shocking.

This is a considerable anomaly in our equality legislation that needs to be addressed through legislation. The most recent confirmation by the Taoiseach that this Government will continue its work into 2016 gives this Bill an opportunity to correct the problem for tens of thousands approaching retirement.