Gardai are appealing for witnesses after an improvised device exploded in Dunlavin this morning.

The device, which exploded in a residential area shortly after 1 am, damaged two parked cars.

It is understood that some residents in the estate thought it was a banger going off but they realized it was a lot more serious when they noticed smoke and heard the alarm going off in one of the damaged cars.

The area was immediately sealed off and the Bomb squad arrived at the scene shortly before 6 am.

They carried out a search of the area and conformed that it was safe for Gardai to carry out a forensic examination at the scene.

The area was declared safe shortly after 7 am and at present there is no further details about the incident.

Speaking on East Coast FM this morning, Sinn Fein Councillor Gerry O’Neill said that locals were stunned by the incident, which occurred in the quiet housing estate.

“The people in Dunlavin are in shock here. It was twenty past one this morning when the explosion went off, residents heard a loud bang. It woke the people in the estate,”

“For this to happen in a quiet little town in Wicklow it’s very frightening.” 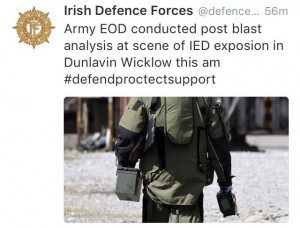