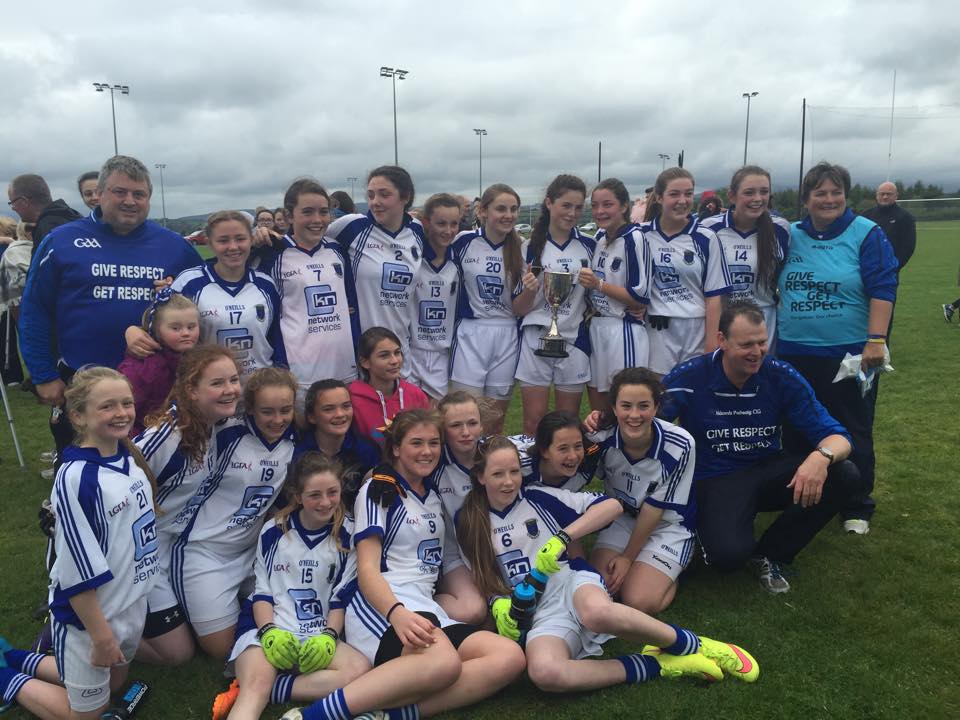 Five in a Row What else can we say about St Patricks u14 ladies panel who on Saturday added the County Championship to their collection of League, County and All Ireland Feile successes in an intense battle with near neighbours AGB.

This was one of the bravest performances from any team that has played for the club as preparation for the final was hindered due to illness, injuries and holidays. Right up until 10 minutes before kickoff Manager Brian McSorley could only name his team as inspirational county star Sinead McGettigan passed a fitness test after injuring her ankle on their final training session last Wednesday.

It was the Wicklow girls’ playing with the breeze started brightly with a long range point from Niamh McSorley followed by a point from corner forward Niamh Caffery. Pats were then awarded a penalty as Niamh Caffery was up ended in the area and it was she who stepped up to hit an unstoppable shot to the roof of net. The Arklow girls made some great efforts to score a goal of their own only to be denied by Pats goalie Amy Kavanagh who was excellent all afternoon.

But there was little she could do as a long range effort from AGB best forward on the day Emma Cox sailed over her head and into the top corner. The same player turned sharply to stroke over a point to leave just one between the teams. St Pats girls missed a few scoreable frees and Sinead McGettigan was unlucky on a few occasions as she bore down on goal.

Emer McNulty had a great chance only to be denied by a great block from the AGB keeper. The resulting forty five was kicked into the danger area by Jess Lyons and there was Niamh Caffery on hand to deflect it into the net for her second goal . Substitute Rachel Winters who came on for the injured Ciara Fagan had a great effort that came off the bar.

AGB came storming back with a well work free and Rebecca O Sullivan was on the end to fire into the back of the Pats goal. St Pats stretched their lead to two points when Naoise O Reilly fired over. Then disaster happened for St Pats just before halftime as midfielders Zoe Armstrong and Luci Hobbs clashed heads when they went for the same ball. Both players had to be taken off.

The team regrouped with the new midfield partnership of Niamh McSorley and Emer McNulty held on to take a two point lead into the break. 2-3 to 2-1. The Arklow girls started the second half on the front foot and got an early goal with a long range soccer shot from Emma Cox. Herself and Pats Captain Kellie Phelan had a brilliant tussle throughout the game.

It was the same player again that went through on goal and had a rasping shot that went over for a point, this was to be AGB’s last score as they led by two. Sarah Evans switched to corner back as another Pats player Aiofe Dunne had to come off as a precaution when the ball smacked her hard in the face .

Evans along with Pats other corner back Lucy Dunne started to sweep up everything that came into them in the full back line as AGB were the dominate team in this period of the match. Soon after the Wicklow girls started to push forward and got a purple patch themselves and were awarded a free which Sinead McGettigan pointed from distance.

This left just a single point in it when the same player was fouled, resulting in an AGB player getting sin binned for 10 mins. This really changed the match as St Pats used the extra player well and started to create chances with both Siobhan Gorman and Naoise O Reilly shooting narrowly wide.

A second point from Sinead McGetttigan levelled the match with 10 minutes remaining. Naoise O Reilly who moved to centre half forward was having a blinder when she was fouled around the midfield. Quick thinking Emer McNulty spotted Niamh Caffery free on the 21 meter line, passed a superb ball into her path and the sharpshooting forward placed a brilliant shot to the top corner to score her third goal of the match. Soon after the same player fired over the assurance point as the Wicklow town girls led by four points.

AGB were back to their full fifteen and tried so hard to break the Pats defence marshalled magnificently by Jess Lyons and Aoife Dunne who came back on and replaced Ellen Griffin in the final few mins. After playing three minutes of injury time referee Anthony Nolan blew his whistle and St Patricks team were the champions for the fifth year in a row, final score 3-6 to 3-2.