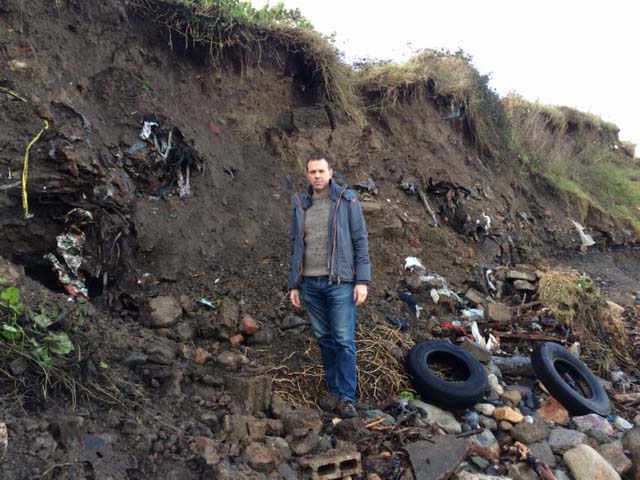 On behalf of John Brady:

Wicklow Sinn Féin Councillor and General Election candidate John Brady has called for immediate action to be taken to stop the old Bray municipal dump from getting washed into the Irish Sea, the dump is located north of Bray harbour. During Storm Frank substantial new sections of the dump were washed into the sea, leading to Brady calling it environmental vandalism.

Speaking after visiting the Back Beach, which is north of Bray harbour, the Sinn Féin councillor said “What is going on at the Back Beach is nothing but environmental vandalism.  I’ve been pushing for action to be taken for the last 10 years stop the estimated 200,000 tonnes of rubbish from getting washed into the sea.  This was a local municipal dump and it was used right up to the 1980’s. Now that it’s closed and the cause of coastal pollution, nobody wants to take responsibility for it. The dump also straddles the County boundaries, so there is an element of passing the book between Wicklow and Dun Laoghaire Rathdown.”

Brady continued “During Storm Frank more large sections of the old dump were washed into the Irish Sea, this waste is then dispersed all along the coast line. Asbestos, rusted metal, heavy plastics, bricks, glass and bags can be seen at the foot of eroded cliffs and also sticking out from the unstable cliffs. This area is subject to ongoing coastal erosion, I’m beginning to believe that some people would just like the problem to be washed away, rather than deal with it. That is simply unacceptable and amounts to environmental vandalism.”

“This needs to be addressed without any further delay. A comprehensive plan needs to be put in place by all stakeholders, Wicklow County Council, Dun Laoghaire Rathdown and the Minister for the Environment. This site was used by Wicklow municipal dump and they can’t shirk their responsibilities. I have been pushing for the council to apply for a Blue Flag for Bray beach, however as long as waste from the old dump continues to get washed up along our shoreline, this will be a difficult thing to achieve.“ Ends