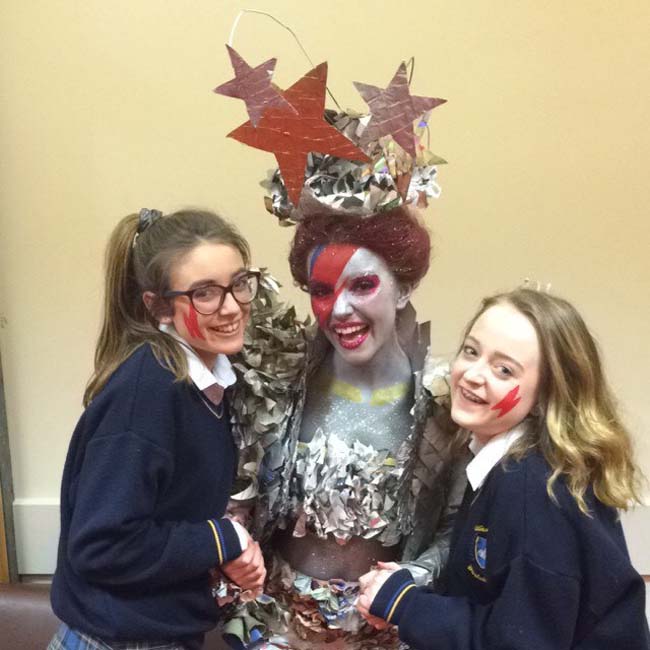 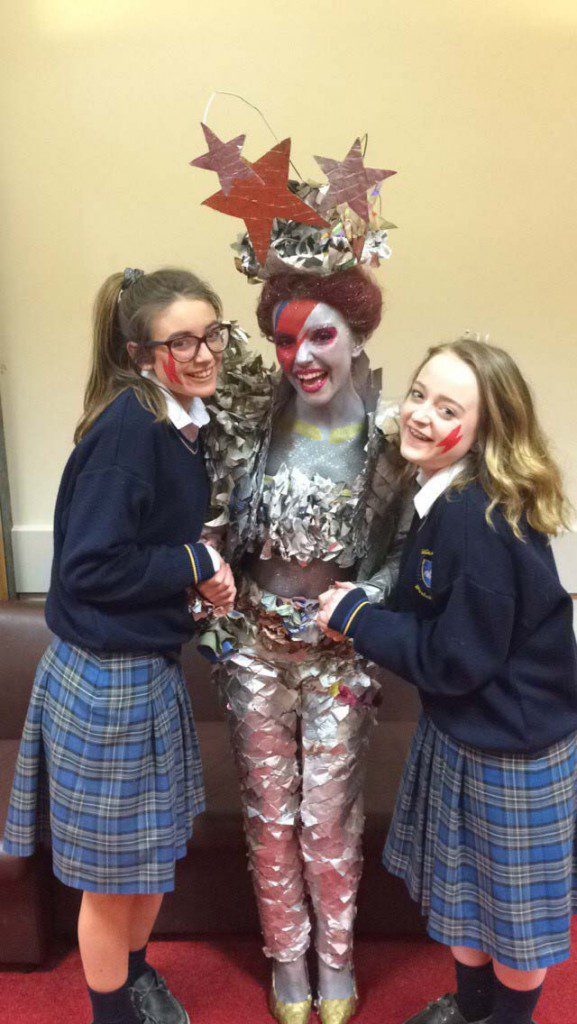 Our names are Rebecca McNally, Saoirse Mullen and Stephanie Hood.

In late October of 2015, we had heard of a competition named Junk Kouture. This was a fashion competition which was run by Bank of Ireland, the objective of the competition was to create a wearable piece of fashion out of complete junk!

We decided as part of TY, to at least try and take part. So one night in late October, we went home and brainstormed ideas for a design.

The next day, we arrived back into school each with a design brief for our proposed outfits. We discussed what exactly we wanted to bring to the competition and all agreed on a particular design that was inspired by our idol, David Bowie.

We got to work immediately on gathering junk and making our outfit in time for the entrance deadline.

One day while we were in the process of making our outfit, it was all over the news that David Bowie had passed away. This came as a shock to us and immediately our outfit became “A Tribute to Ziggy Stardust”.

We were lucky enough to progress to the Regional Finals in the Helix Theatre Dublin and we were delighted with that, but at the end of the Regional final when our outfit was called out onto the catwalk as one of the 20 Grand Finalists we couldn’t believe it!

We worked tirelessly preparing a routine for the catwalk for the Grand Final which would be in the 3 Arena Dublin.

On the day of the Grand Final, we went to the 3 Arena accompanied by Ms.Heaney, Ms.McGrath, Ms. Stenson and our supporters from TY and at the end of the show our outfit was crowned the Winner of the Eastern Region 2016!

I think the three of us have all agreed there are no words for how shocked and delighted we were that we had been chosen as one of the four winners.

The day after the Grand Final, our team and our three teachers all took a trip to the RTÉ Studios to showcase our outfit on The Late Late Show along with the other three winners.

Junk Kouture has definitely been the most amazing experience for the three of us and it is definitely one we will never forget!