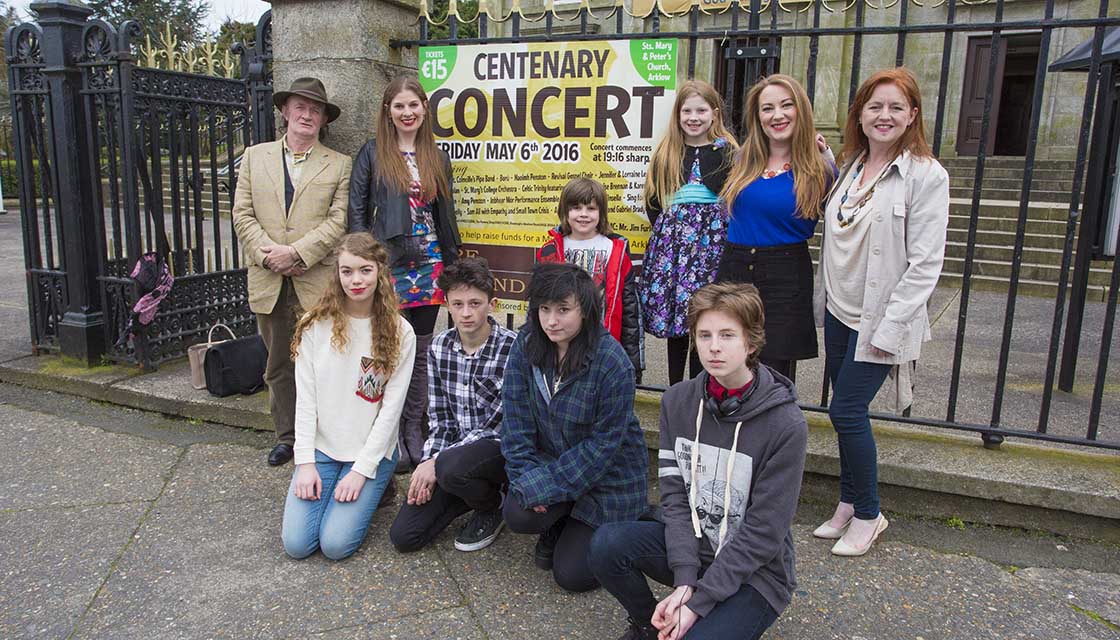 As part of the 1916 Centenary celebrations nationwide Arklow Music and Arts will host a concert on Friday 6th May at 19.16pm in Sts. Mary and Peter’s Church, Arklow, which will celebrate the music from 1916, and songs that have a particular resonance with that time.

The night will include a reading of the proclamation by Gabriel Brady, grand-nephew of Christopher Brady, songs written by Padraig Pearse and a re-enactment of his speech at the grave of O’Donovan-Rossa

During our 1916 Centenary Concert we intend to do a little tribute to just a few of the legends from The Arklow Music and Arts Scene over the years who are no longer with us. We are going to remember them, reflect on their wonderful performances & reimagine what they and our current & future generations would be like with a state of the art purpose built venue of our own. Please feel free to make a few suggestions who we should include.

Small Town Crisis lead singer Sean Fox, has penned a special song entitled “40 Pins Fall Down” which remembers the 40 children who died during the 1916 rebellion. More than 370 civilians were killed by gunfire during Easter Week in 1916, forty of whom were children aged between two and sixteen years old. The children were from working class backgrounds and have not been remembered due to their social class. Sean and the band members: Darragh Gavin, Darragh Black, Jack Hanlon and Cat Leibowitz  pay tribute to their memory in this specially commissioned song

Another special commissioned song comes from Boru entitled “The Floral Lady” and features a 5 piece string quartet on the night.  Katherine Brennan Kinsella has composed a musical tribute to the 1916 Rising. “In Remembrance 1916” is a traditional air composed by Katherine in memory of all those who lost their lives in this tragedy.

Award winning brothers John and Denis Nolan, will add to the line-up. John is a very talented musician and much sought after locally while his brother Denis is the current All-Ireland Champion on the Harmonica, having won the title last year.

A special commemorative programme is being compiled at the moment and will be available to purchase on the night and will make a great keepsake. Anyone who purchases a programme will have the added advantage of being entered into a draw to win a specially commissioned piece by Dave Bardon, who will be exhibiting some of his work especially done to commemorate the signatories who lost their lives in 1916.

With such a vast amount of talent on the night it promises to be something really special with all the artists giving freely of their time and talents, it will also showcase some of the wonderful talent that Arklow has become famous for both at home, nationally and internationally.

How did Arklow Music and Arts come about?? Chairperson, Yvonne Kenny, says ”What started out with the press of a button as a result of reading nothing but negative comments on social media sites about a town I knew had so much more to offer, and a feeling there was a need a dedicated page to advertise all the many local events that take place on a weekly basis in Arklow AMA was born.”

“ I think it’s fair to say it has far exceeded everyone’s expectations, with a membership now in excess of 2,100 it has become one of the largest and most frequently used social media pages dedicated to Music and the Arts you will find anywhere.”

The committee have been working tirelessly on this concert, proceeds of which will go to a Performance Arts Space and Theatre for the town of Arklow and will house the many groups and organisations in the town and a place to call home. A big thank you to everyone who has helped, supported or contributed  financially in any way to this big task that lies ahead. Working together we can make this dream a reality and put Arklow on the map for the right reasons. Throughout the year a number of events are being planned and if you would like to keep up to date with what is happening leave your contact details on the book that will be at the entrance to the Church on the night of the concert or visit our Facebook page, “Arklow Music and Arts” like and share with your friends.

The committee of Arklow Music & Arts Scene are as follows: