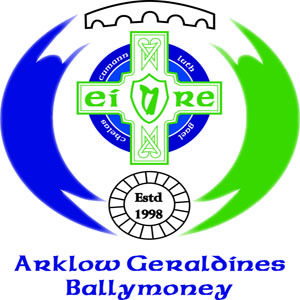 Sunday 08 May 2016 was Lá na gClubanna and  it was celebrated by a special ceremony with the re-dedication of the grounds to the Pearse Brothers,the reading of the Proclamation and the raising of the National Flag.  A tree was planted on the grounds by Mr Joe McElerohon and Mr Henry Hurley. The Scór Dancers and Singers performed our National Anthem and some other traditional Irish Songs. The formalities,  were followed by a Family Fun Day and BBQ on the lower pitch, at which club members, young and old, along with their families and the community of Arklow celebrated in the glorious sunshine.  Special thanks to all who ensured that the day was a success, thank you to all the helpers who worked tirelessly over the last few weeks in the back ground arranging the day, the helpers who came out to help set everything up so early on the morning, and to those who cleaned up in the evening, the singers and dancers, the BBQ and club shop team, and all who looked after the games, face painting and raffle ticket selling. Thank you for all your support.

AGB U16 Division 3 girls played St Pats mid week with a winning score of 3-8 to AGB and 2-4 to St Pats.  AGB were quick off the mark with Kinga Kalinowska smashing in a great goal shortly after the throw in. The girls continued to press and were unlucky not to add scores, with shots going marginally wide. St. Pat’s then got back into the game, scoring some well worked points. It was then AGBs turn and the girls kicked some great points to lead by two points at half time. There was no let-up in the second half with both sides working very hard. AGB didn’t have it all their own way with St Pats contributing to a great game of football, but after hitting the post and the bar, AGB went on to deservingly win.

AGB U16 Division 1 girls took on St. Pats in Pearse Park in the league with a finishing score of AGB 2-3 to St Pat 2-13. The first half was tight with end to end football and both teams took good scores . After a bit of debate about the scoreline AGB trailed by 2 points at the break .More of the same was the message at half time,  but Pats found an extra gear and as the girls tired they were able to pull away on the scoreboard .

AGB U8 and U10 girls hosted Kilanerin in a friendly home blitz.

AGB U8 and U10 Boys travelled to Carnew for a Blitz.

County Development Draw tickets are currently on sale for €50. Please contact any club official if you would like to buy one.  Please ensure tickets are returned to the club by the 15th of May.

The next meeting of the Arklow Geraldines Ballymoney Club Executive is scheduled for Wednesday 8th of June 2016 at 8.00pm in Pearse’s Park.

AGB Club gear is available at great prices. See gear and prices at: Club Gear on Facebook. Contact Kerry on 087 3287881 to order.

Please send club notes to arklowgaa@gmail.com or agbladiespro@gmail.com. You can contact the AGB PRO at above email, Facebook (‘Arklow Geraldines Ballymoney GAA Club’ or ‘AGB Ladies’) or Twitter