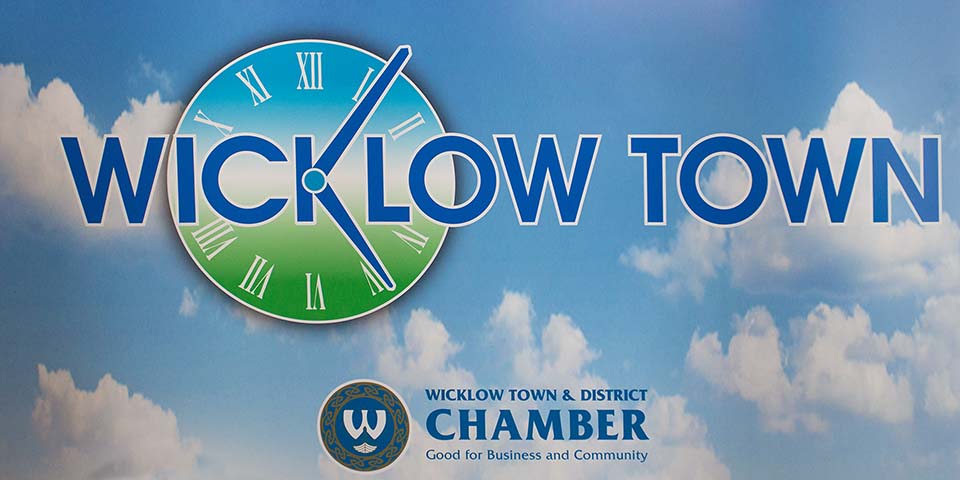 Shaping the future of business in Wicklow Town.

In Wicklow Golf Club, there was a real buzz at the unveiling of the new Brand for Wicklow Town. Over 120 people attended the launch and they left very impressed by the plans outlined to shape the future of business in Wicklow Town.

Catherine Fulvio from Ballyknocken Cookery School, Celebrity Chef, broadcaster and food writer spoke of the importance of establishing a strong durable brand to promote Wicklow Town.  She described Wicklow Town with its beautiful coastline as a hidden gem.

Catherine gave a very witty and incisive account of how she established her brand. She said, that having had a sneak preview, and knowledge of the plans to market the brand, that she was very enthusiastic and promised to be actively supportive of the Chamber’s future plans. She described herself as an ambassador for Wicklow Town.

David Shannon, a native of Wicklow Town and Managing Director of Toyota Ireland 1994-2014, speaking at the launch explained that it was very important that the business community were to the forefront in promoting the new brand. He said that the launch was merely the start of a journey to establish Wicklow Town as a tourism and retail destination. He said that he was very impressed with the new Logo and the plans to bring all the business community on board to promote it.  He said, however, that the real key to the success of establishing a brand was passion, pride, consistency and belief.  In order for the brand to be successful, there needed to be a genuine commitment by the business community to ensure that the brand achieved its objectives in creating a more dynamic and successful economy that would benefit everybody.

Chamber President, Pascal Burke, paid tribute to the Chamber sub-committee who worked together with local creative design company, Shark Design for their work in developing the brand which he believed firmly would play a key role in establishing Wicklow Town as a fantastic place to live, work, shop and play.

Launching the brand, he outlined the marketing plans to establish the brand. He said that the new brand was a significant investment by the Chamber. As part of an on-going  initiative, it is planned to   erect  twelve colourful banners on the main street with the themes ‘Time to Relax, Time to Discover, and Time to Enjoy’.  There will be twenty locations in the town for a new map with the theme ‘Take the time to discover Wicklow Town’. It is also planned to issue a folding map with a list of local retail and tourism services available in the town. The new logo centres around the theme of time. There will be a three month campaign on East Coast Radio to promote the new brand.