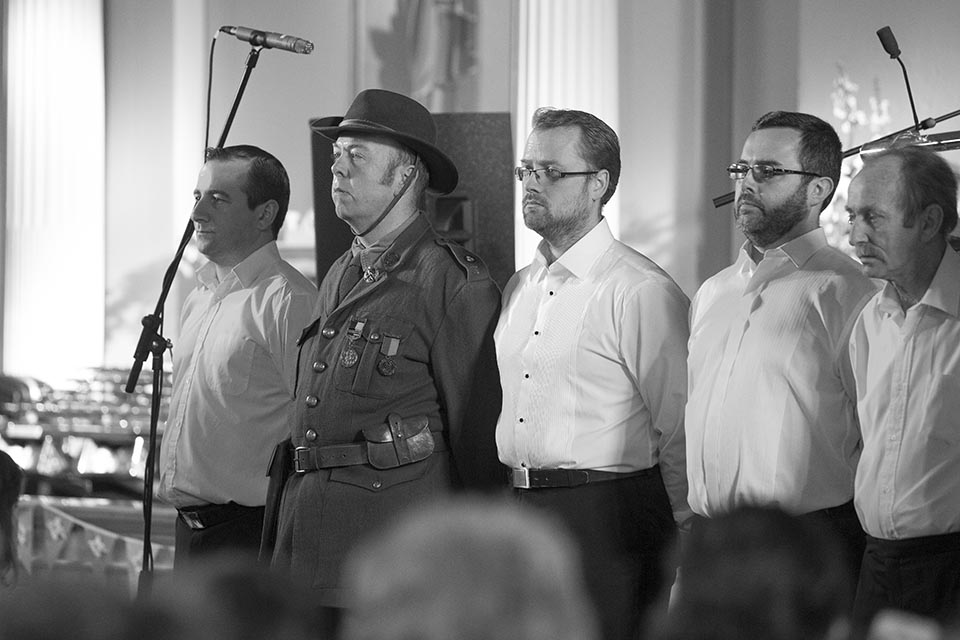 “Stunning, amazing, best night ever in the church,” just some of the words people were saying as they exited the 1916 Centenary Concert in St. Mary and Peter’s Parish Church, Arklow on Friday night last. “Arklow Music and Arts Group are destined to get a Theatre and Performance space judging by this world class night of entertainment” were other sentiments expressed by the capacity crowd of just under 800 people who attended. The concert was streamed live to audiences throughout the world including Johannesburg, USA and many other countries who tuned in to hear this breath taking concert. Over 5000 people viewed this concert on the AMA page, such was it popularity since Friday night.

In what can be only described as amazing, over 200 participated in this event and gave audiences a night to savour and remember. Four of the 5 T.D’s were down to attend, but due to the proceedings in Leinster House on Friday afternoon, following the election of Taoiseach Enda Kenny, they were all recalled and were not in a position to attend. All sent their apologies and were disappointed, but sent their best wishes to the committee and participants for the night.

St. Mary’s College Orchestra reformed in 2010 at the request of Sr. Sior Cosgrove, under the direction of Ms. Christine Steel, got proceedings off to a fantastic start as they played to the audience on their entry to St. Mary and Peter’s Parish Church, closely followed by St. Colmcilles Pipe Band who marked a very significant milestone this year, 2016, as they reach the 75th anniversary of the foundation of the band. Under Pipe Major John Earls and Drum Sergeant John Martin, and had people gearing up for a super night of music and song.

MC was Mr. Jim Furlong, who did a wonderful job and kept the show flowing all night

A reflection and tribute, honouring the  sixteen executed leaders of the 1916 Rising then took place. Celtic Trinity members Avril O’ Toole, Denise Brennan and Karen Mc Gillycuddy, raised the bar and gave a great rendition of “Grace”, “With or Without You”, “How Great thou Art” under the guidance of Musical Director Paul Barrett.

“Sing for Fun”, which was set up in 2015 by Mary Walsh, is a group of ladies from all walks of life who come together on a Monday night with the sole purpose and aim in mind and that is to “Sing for Fun”. Their programme featured a short cameo life in 1916 Ireland through Poetry and Song. Accompanying them were Rosarii Kinsella on Piano and Jimmy Myler on bodhran and their Musical Director Mary Walsh.

Robert Donnelly gave a recital of Padraig Pearse’s oration at the graveside during the funeral of Jeremiah O’Donovan Rossa.

Small Town Crisis a five piece teenage pop/punk/rock band comprising of: Sean Fox (15yrs old)- Vocals and Guitar, Darragh Black (17 yrs old) – guitar and backing vocals, Darragh Gavin (17 yrs old) – Guitar, Cat Leibowitz (17 yrs old) – Bass and Jack Hanlon (15 yrs old) – Drums, and only 9 months in existence, performed their self-penned song entitled “40 Pins Fall Down” which remembers the 40 children who died during the 1916 rebellion. More than 370 civilians were killed by gunfire during Easter Week in 1916, forty of whom were children aged between two and sixteen years old. The children were from working class backgrounds and have not been remembered due to their social class. Along with Small Town Crisis, Empathy – a two piece Indie band made up by members Cat Leibowitz and Olivia Sheehy, and Sam Ali on keyboards performed this wonderful piece and was received very well by all those in attendance.

Sam Ali performed “Us against Ourselves” which he self-penned and was accompanied by Rachel Doyle and Christine Steel and was a real treat on the night. Jennifer and Lorraine Lee joined by Rachel Kealy, performed “A Stoirin Ban, “Anahorish” and accompanied by John Bonner on Keyboards, gave another exciting and wonderful performance.

Boru members – Tommy Breen and John Hogan performed “Ireland Unfree” and “The Foggy Dew.” Tommy and John were joined by Christine Steel and members of the St. Mary’s Orchestra performing their specially commissioned piece entitled “The Floral Lady”, which proved a huge hit before closing the first half of the programme with “Oro Se Do Bheatha Bhaile” and everyone in the church participating.

Part two of the programme saw Inbhear Mor Performance Ensemble under the guidance of Musical Director, Oisin Molloy marched up the church and gave wonderful renditions of “Sean South from Garryowen”, “Mise Eire” and “The Minstrel Boy” wowing the audience with their musicianship.

Award winning brothers, John and Denis Nolan teamed up with Johnny Stafford and performed “The Shadow” and “My last Farewell” again showcasing the wonderful talent in Arklow and surrounding area.

Arklow Music and Arts (AMA) Young Performers, accompanied by Paul Barrett and under the guidance of Musical Director, Denise Brennan gave a rousing rendition of “Ireland’s Call”  brought everyone to a standing ovation. Katherine Brennan Kinsella performed “In Remembrance 1916” a musical tribute to those who were killed in 1916 followed by “The Centenary Jig”, another wonderful performance which was very well received.

Arklow Revival Gospel Choir under Musical Director, Geraldine Hamilton, thrilled audiences with “The Shepard”, and “I wish I knew How It Would Feel To Be Free.” The choir mantra is “life is not measured the breaths we take but by the movements that take our breath away” and they did just that.

Naoimh Penston gave a wonderful rendition of “Mna na hEireann and was accompanied by Christine Steel and John Bonner. Joining Naoimh were daughters, Amy and Leah Penston, who gave a breath-taking performance of “Men of Erin”

Amy and Leah Penston went on then to perform “The Prayer” wowing audience with their performance and once again bring the audience to their feet.

The reading of the proclamation by Gabriel Brady, grand-nephew of Christopher Brady, who was responsible for the printing of the document in 1916 followed, to rapturous applause.

“You Raised Me Up” finished the night by Celtic Trinity, Naoimh, Lea and Amy Penston before “Amhran na bhFiann brought the night to a close.

With such a vast amount of talent on the night it proved to be something really special with all the artists giving freely of their time and talents, it showcased some of the wonderful talent that Arklow has become famous for both at home, nationally and internationally.

A special commemorative programme compiled by Colm Kavanagh, proved a huge hit with all those in attendance, who did an excellent job and was a labour of love, despite many sleepless nights. Footage on the screens the church, again done by Colm K, proved a huge hit and added to the overall success of the night.

Dave Bardon, exhibited some of this work depicting the signatories who lost their lives in 1916 and donated a custom made glass portrait which was won by Robert Donnelly.

AMA Chairperson Yvonne Kenny said that the committee “ have been working tirelessly on this concert, proceeds of which will go to a Performance Arts Space and Theatre for the town of Arklow and will house the many groups and organisations in the town and a place to call home”. “A big thank you to everyone who has helped, supported or contributed  financially in any way to this big task that lies ahead”. “Working together we can make this dream a reality and put Arklow on the map for the right reasons”. Throughout the year a number of events are being planned and if you would like to keep up to date with what is happening visit our Facebook page, “Arklow Music and Arts” like and share with your friends.

Many thanks to everyone who helped out in any way to making this concert an outstanding success, to all the people of Arklow and surrounding areas for coming out and supporting, a big Go Raibh Mile Maith Agaibh Go Leir” To our sponsors, who took adverts in the programme and our patrons, a huge debt of gratitude to you all, thank you also the press and media for all the coverage.  If we have forgotten anyone, please accept our apologies. A big thank you to all the participants who gave freely of their time for this wonderful event and project.

Finally, thanks to Fr. Martin Cosgrove for allowing us to stage our 1916 Centenary Celebration Concert in St’s. Mary and Peter’s Church, proved to be a wonderful venue, until we are in a position to stage in our own theatre.