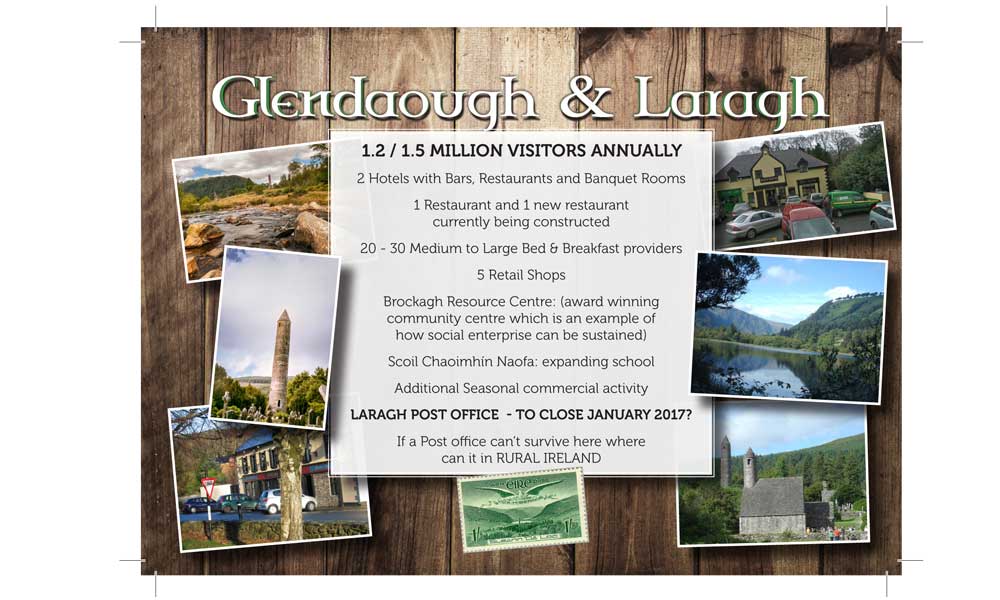 A protest will take place at Laragh Post Office at noon today Saturday the 21st of January.

The Community of Laragh and Glendalough received the news in December that the post office which as been open for 150 years is to close at the end of this month.

Local T.D Patrick Casey made his feelings known in the Dail last Wednesday.

“This is the first urgent piece of legislation to assist in the Irish people’s legitimate desire to see An Post survive and adapt to a changing world and continue to provide its crucial services to ALL the people. As such it is to be welcomed even if its effect will be to see the cost of certain services rise.

However the urgency of this bill while welcomed is not being accompanied by urgent Government action in the retention of postal services for all people.

I note that another purpose of this bill is to give An Post further remits as the universal service provider of postal services which again is laudable.

However any reasonable person looking at this Bill which claims to enable An Post to be a universal postal service, regardless of geographical location will probably be very puzzled, as indeed I was.

Minister, maybe I’m wrong but An Post providing a universal postal service regardless of geographical location is a fine statement, but it’s similar to the language that the new President elect uses – it doesn’t stand up. It’s simply not true to reality.

While we are talking here about protecting this universal service provider regardless of geographical location, An Post is closing rural post offices all over Ireland.

Just before Christmas Minister, when I should have been expecting a Christmas card, I got a phone call from An Post who informed me that my local post office in Laragh would be closing in January. Now this was shocking enough but when you look at this further the decision does not make any commercial sense.

Laragh has had a Post Office for over 150 years Minister. The reason it has had a post office for this length of time is that Laragh is located beside one of Ireland’s oldest and most popular visitor attractions, the monastic City of Glendalough and the spectacular valley that surrounds it.

Minister, Laragh Post Office is in a small Wicklow village that happens to receive 1.2 to 1.5 million visitors a year. I think that is worth repeating.

Minister, An Post is about to close a Post Office in Laragh where there are 1.2 to 1.5 million visitors a year. Most businesses I know would break their necks trying to get access to such a potential market – An Post, no – close the office and do it over the Christmas period so nobody will notice.

Well the people of Laragh noticed Minister and I commend them for their swift actions in defence of this service. When I arranged a meeting with Officials from An Post, I was told that that they were indeed surprised at the lack of feedback from the Public consultation period. I informed them that this was because the public were not consulted and this reason alone should delay this decision.

Minister, Laragh Post Office should be an example of how your Government is listening to the people and attempting innovative and flexible solutions while taking advantage of the unique opportunities that this rural Wicklow village offers.

In fact when comes to the political leadership on this matter it seems that your department believes that the Minister for Arts, Heritage, Regional, Rural and Gaeltacht affairs are in charge because of the rural post office network group that is co-ordinated from there. Confusion when it comes to political leadership is dangerous.

Minister, your Government is constantly talking about listening to the concerns of rural Ireland and responding with actions. But Minister, your fine intentions will mean nothing if rural post offices continue to close.

If An Post management cannot find the business sense and dare I say it cop-on to see the opportunities that lay in Laragh then what credibility will any promise have to protect rural post offices in other parts of Wicklow or for that matter Ireland.

All the Ministers involved in this area of policy are rural based TD’s and know as well I do, the value of the rural post office. If An Post will not act I implore you as Ministers, to act to ensure that An Post implement the Kerr report immediately and prevent the closure of viable rural post offices such as Laragh.

I repeat – if Laragh cannot retain a post office when it has 1.2 – 1.5 million potential customers – then what hope is there for any Rural Post Office?”