Relief for Cloheesy after beloved pet found in Wicklow Mountains

168
SHARES
ShareTweetSubscribe to our Newsletter

Former Irish International Peter Cloheesy has been reunited with his beloved dog 9 months after it first went missing.

The dog was found wandering the Wicklow Mountains over 130 miles away from where it was stolen last year.

A motorist who noticed the dog in a fragile state  lifted it into their car, and after posting images of it on Facebook, the rottweiler was then identified as ‘Rosie’ – one of two rottweilers that was stolen from his Limerick home.

The former Ireland and Munster legend had started a campaign on Facebook last April after the pair were stolen and until Saturday had no look in getting the pair back. 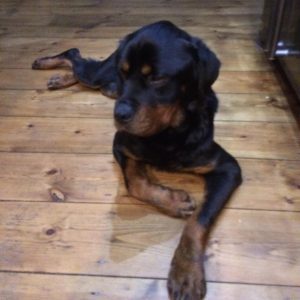 Robin is back home and recovering from her ordeal Picture : Facebook

Cloheesy’s wife, Anna Gibson Steel said that being reunited with their beloved Rosie was a bittersweet moment as their other dog ‘Jessie’ is still missing.

Speaking with the Limerick Leader she said : “We are very blessed to welcome home Robin after nine months.

“When you see the state of this lady your heart gets a bit sad thinking of her but hopefully… until someone proved to me they were dead they were alive so hopefully this might raise awareness about Jessie.”

“She is quite shook but a lot of tender loving care and she’ll be back to her bouncy self soon. It was a miracle that the dog had the fight to keep going against all odds.”

The couple are now appealing for anyone with information that might help them locate Jessie to come forward.

“We would love to be reunited with Jessie, She is micro-chipped and name tagged, hopefully someone knows something. 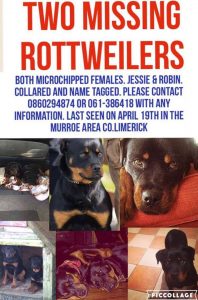