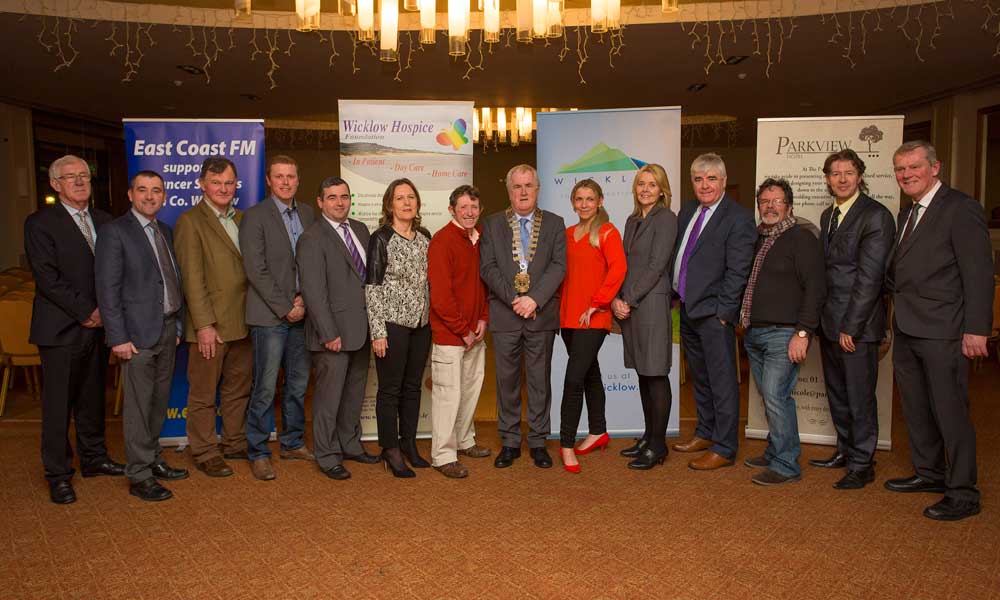 Wicklow County Councillors are organising a major fund-raising event for the Wicklow Hospice which it is hoped will raise over €100,000 for this worthy project.

The members of Wicklow County Council took a unanimous decision to organise a Gala Dinner fund-raising event on the 7th April in the Parkview Hotel, Newtownmountkennedy, in aid of the Hospice .

There is an urgent need for a Hospice in County Wicklow and although great work has already been done by all involved, the councillors felt they could help with a major contribution. The councillors have pledged €10,000 from each of their five respective Municipal District funds of Bray, Arklow, Greystones, Wicklow and Baltinglass.

Wicklow Hospice is ready to start building but needs another €1m in order to place the building contract.  To date €3.5m has been raised by the Foundation through the generosity of many people in Wicklow and beyond.  All of the money raised will go towards the building fund for the Wicklow Hospice, plans for which are well underway and which has benefitted from generous support by the people of County Wicklow.

The site for the Hospice at Magheramore has been donated by the Columban Sisters; the building plans have been prepared and full planning permission has been received. The 15-bed facility – which will be operated by Our Lady’s Hospice, Harold’s Cross – will be the hub of palliative care services for the county. The Department of Health/HSE will meet the annual running costs of €3m.

Supporting the Gala event, the Cathaoirleach of Wicklow County Council, Cllr Pat Fitzgerald, said: “This is an excellent cause for the elected members to be involved in, a project that will benefit the entire of County Wicklow.  I would like to express my sincere appreciation to the five Municipal Districts who have pledged €10,000 from their discretionary fund and to congratulate the committee for the work so far.  I look forward to attending the event in April, and wish the Wicklow Hospice and the elected members every success in this fundraising effort.”

The event which was launched on Thursday night (Jan 26th) in the Parkview Hotel, will include a charity auction and will feature guest entertainment.  A special committee – representing all 32 councilors as well as the Hospice Foundation – has been established to oversee the event.

The Chief Executive of Wicklow County Council, Mr Bryan Doyle, commended the elected members for their extremely generous support for this very worthwhile project and said he too looked forward to seeing the facility built and operational in the near future.

Mr Sean Dorgan, Chairman, Wicklow Hospice Foundation, said: “We are extremely indebted to the elected representatives of Wicklow County Council for this major initiative which will raise significant funds, propelling us forward on the path to commencing the build of the long-awaited Hospice facility.

“Our elected representatives are leading the charge in ensuring that the Wicklow Hospice becomes a reality in the near future.  The entire Wicklow community has been behind this project from the very beginning.  Despite all of the challenges over the years, so much has been achieved and with this incredible boost in fundraising, the €1million target to the build is now very much within reach.”