5 years ago a group of residents in Wicklow town planned archaeological dig as part of a search for a lost granite cross which, according to local historians, had been missing for 60 years after a Catholic priest ordered it be removed over its explicit carvings.

The two-metre high celtic-style cross stood outside St. Patrick’s Church in Wicklow Town until the late 1950s when the then parish priest Fr. Matthew Blake, now deceased, is believed to have taken umbrage over what he felt were pagan depictions of possibly nude female figures.
While there are varying accounts about what’s on the cross and about Fr.Blake’s motivation – including that locals had complained it drew fairies– a number of local experts believe he may have buried the monument in church grounds without telling parishioners because he disliked the carvings.

On Tuesday of this week construction workers found the cross while carrying out works for a new car park close to the boundary of St,Patrick’s N.S.

A worker on the site told Wicklownews ” It was not that far down, we lifted it up with the digger and placed it to one side, we had no knowledge of the stories behind it and thought it was an old grave marking.

On Wednesday the cross was lifted to see if the explicit carvings were on the front of the cross, but there was no sign of Sheela na gig, it is now believed the markings may have been on the plinth which held up the cross.

It is believed Fr.Blake had the plinth smashed into tiny pieces and discarded in the grounds of the Parochial hall.

Current parish priest Fr.Donal Roche is keen to have the cross restored and placed within the church grounds. 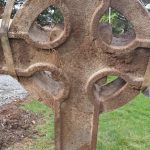 The front of the cross 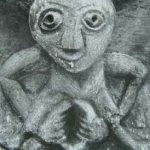 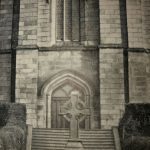 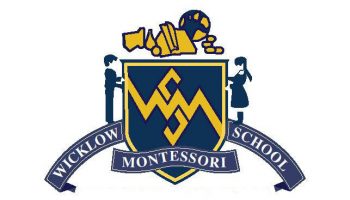