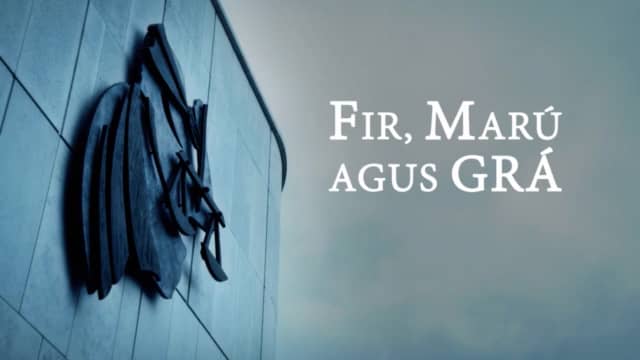 Fir, Marú agus Grá is a compelling but dark docu-drama series that offers a startling, compelling and uncompromising look at the court cases of six men for the murder of their intimate partners.  Featuring interviews with the investigative team, court reporters and journalists who covered the cases, the story of each case will be pieced together through reconstructions of the main pieces of evidence that were presented at each trial by the State Prosecution.

In Ireland, nearly nine in every ten women who are killed are killed by a male known to them. By and large, these Intimate Partner Homicides are usually preceded by physical or mental abuse, controlling behaviour and harassment. But separation can also be a catalyst for violence and for women, it is often a dangerous time to be around the men they wish to leave.

Fir, Marú agus Grá tells the untold stories behind these heinous crimes. In each case we revisit the often turbulent relationships that preceded these crimes and examine the evidence and testimonies that were crucial in successful prosecutions.

Episode 1: Examines the trial of Laois man Robert Corbet for the killing of Aoife Phelan in 2012. 13 days after she was first reported missing by her family, Aoife’s body was discovered in an oil barrel buried 10 feet underground on Corbet’s land.

Episode 2: Catherine Smart’s body was found in her home on Easter Sunday 2010 in Midleton, Co. Cork. Arrested for the first time 38 days after the death, Derrick Daly stood trial for her murder in 2011.

Episode 3: In January 2010, the body of Romanian nurse Loredana Pricajan was discovered in a Dublin hotel by the night porter on duty. Her ex-boyfriend, Romanian national, Mihalache Marian, who was also found injured at the scene, stood trial for her murder a year later.

Episode 4: Examines the trial of Goodwill Udechukwu for the murder of his wife, Jamaican mother of two, Natasha Gray, in her apartment in Phibsboro in 2003. After killing Natasha, Goodwill disappeared without trace only to be arrested for a different crime in London in 2005.

Episode 5: Tells of the killing of Catherine McEnery in Rose Cottage, Craughwell in 2005. Her partner of ten years, Kieran Lynch stood trial for her murder two years later in what was the first murder trial held in Galway since the Maamtrasna murders in 1882.

Episode 6: In the first instance of a person accused of murder in Ireland being tried in Britain, this episode examines the evidence presented at the murder trial of Christopher Newman for the horrific and tragic murder of Georgina Eager from Wicklow in Walkinstown, Dublin in 2003.