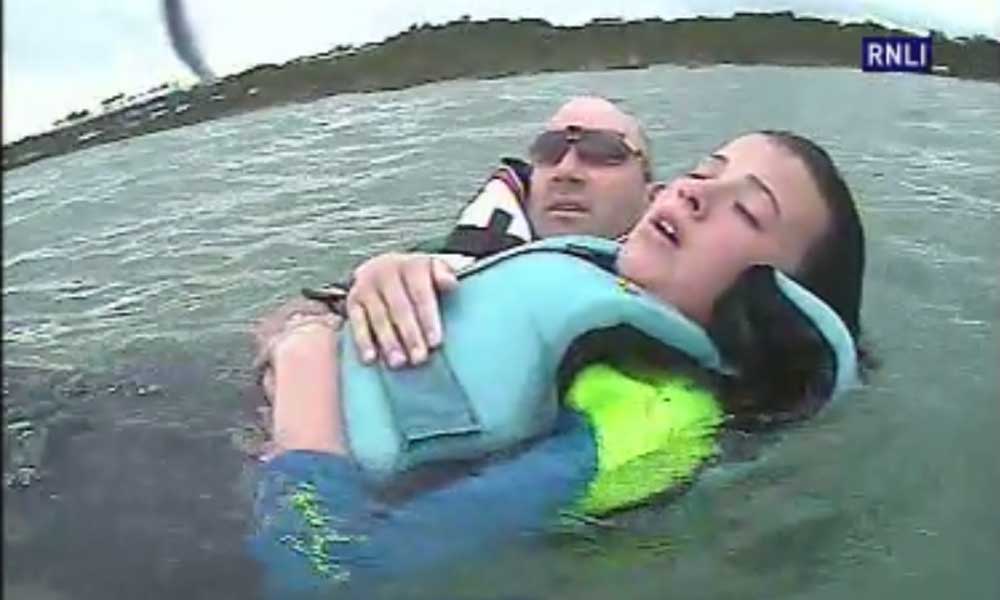 494
SHARES
ShareTweetSubscribe to our Newsletter

Volunteers from Courtown RNLI in County Wexford kept a teenage girl with suspected spinal injuries afloat in the sea for 40 minutes after she fell off an inflatable donut.

The rescue which took place on Friday afternoon last (11 August) unfolded when a member of the public raised the alarm at 4.25pm. The man reported that a jet-ski had broken down and was drifting up off Ardamine Beach. The man then made a second call to say a teenage girl was in difficulty in the sea with suspected back injuries after coming off an inflatable donut which was being towed by the jet-ski. The jet-ski had been towing the donut when it got a rope in the water intake which disabled it.

The D class lifeboat from Courtown RNLI was immediately launched helmed by Peter Browne, and made its way to the scene. Once on scene the lifeboat crew observed the jet-ski not far from the girl in the water and also a kayaker who had come to assist. The girl’s father who had been on the shore had made his way to his daughter and was supporting her in the water.

Two crew members Fergus Slevin and Father Tom Dalton got into the water and assessed the casualty. With the father of the casualty transferred onto the lifeboat, the crew having assessed the pain levels of the girl requested the full assistance of a helicopter to airlift the casualty.

The Rescue 117 helicopter from Waterford was on exercise at the time and went to refuel before immediately returning to the scene. Meanwhile Fergus and Father Tom immobilised the girl, put a neck brace on and ensured she remained afloat, flat in the water and straight at all times, for a 40 minute period. They did so while treading water and continuously chatting to the young girl and keeping her reassured.

On arrival of the helicopter, the lifeboat was advised to drop the drogue anchor to keep the lifeboat head on to the wave, and to cut the engine. With this done, the helicopter lowered the winch man who used a rigid stretcher and slid it underneath the casualty to make sure there was no movement. The girl was strapped and lifted on to the lifeboat and brought to the nearby Glendoyne beach where the local shore based Coast Guard Unit was waiting to assist. The lifeboat was beached enabling the helicopter to perform a high lift. A basket was lowered for the casualty and she was airlifted to University Hospital Waterford for further treatment.

The all-weather lifeboat from Arklow RNLI was also launched and on arrival the two people on the jet-ski and the kayaker were taken onboard and transferred back to the entrance of Courtown harbour where they were then transferred onto the inshore lifeboat and brought into Courtown and met by a waiting ambulance crew and treated for shock and cold.

Speaking following the call out, Sam Kennedy, Courtown RNLI Lifeboat Operations Manager said: ‘I would like to highly commend the lifeboat crew for their decision making on Friday. On hearing the casualty had suspected back injuries, they ensured the girl was keep flat on the water for 40 minutes, all the time while they were treading water themselves. We want to wish the casualty a speedy recovery after what was a frightening experience for all involved. This rescue was a great example of the RNLI and the Irish Coast Guard working well together to bring someone to safety and we would like to thank our colleagues here in Courtown and in Rescue 117 and also the member of the public who raised the alarm.

‘We would remind anyone planning a trip to sea to always respect the water and to remember inflatables are designed for using in a pool and not the open sea. Always wear a lifejacket and always carry a means for calling or signalling for help. Should you get into difficulty or see someone in trouble dial 999 or 112 and ask for the Coast Guard.’ 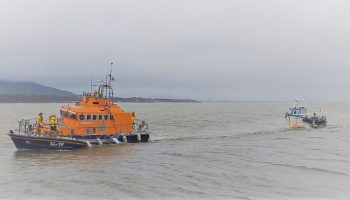