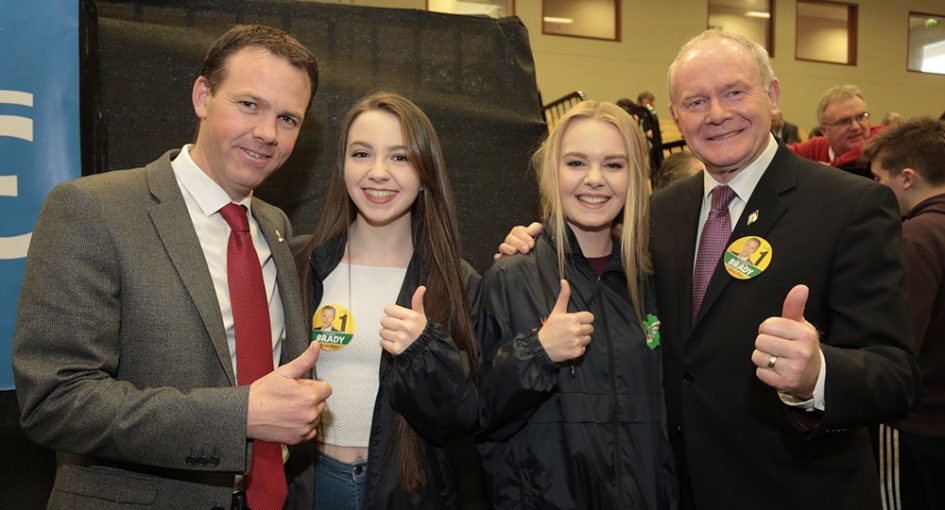 A thumbs up for John Brady from his daughters Siobhradh and Megan with Martin McGuinness, who dropped into the Shoreline Leisure Centre in Greystones to show his support for the Wicklow Sinn Fein candidate (Pic.Michael Kelly)

John Brady, Sinn Féin’s spokesperson on Social Protection and TD for Wicklow and East Carlow, has expressed his support for Mary Lou McDonald in the party’s leadership race.

Brady tweeted his support on Thursday morning when he said: “Proud to support @MaryLouMcDonald for the position of Uachtarán Shinn Féin. She has the total support of Wicklow Sinn Féin. A big thanks also to @GerryAdamsSF for your leadership and taking us to this point. #ShesThe1“.

His tweet comes less than a day after the Wicklow branch of Sinn Féin unanimously nominated McDonald for leader.

Gerry Adams, the outgoing President of Sinn Féin, announced at a party Ard Fhéis in November that he would be stepping down from the role in 2018 after 34 years.

“I’m very proud to have served as Uachtarán. Last year, myself and Martin [McGuinness] said there was a plan for change. I thought I needed to tell you… I have been privileged to be part of an amazing leadership,” he said.

Shortly after the announcement, the party’s finance spokesperson Pearse Doherty and housing spokesperson Eoin Ó Broin ruled themselves out of the race, leaving McDonald as the clear favourite for the position.

Despite the leadership change, Sinn Féin chairperson Declan Kearney said that the party would remain committed to its core principles.

Speaking at a break in an Ard Comhairle meeting in Dublin in December, Kearney said: “Our new leader will lead the only all-Ireland political party, one which is uniquely placed to meet the challenges and resist Tory attempts deliver a hard Brexit and a hard border.

“We also remain committed to seeing a restoration of the Good Friday Agreement political institutions on the basis envisaged in that and subsequent Agreements.”