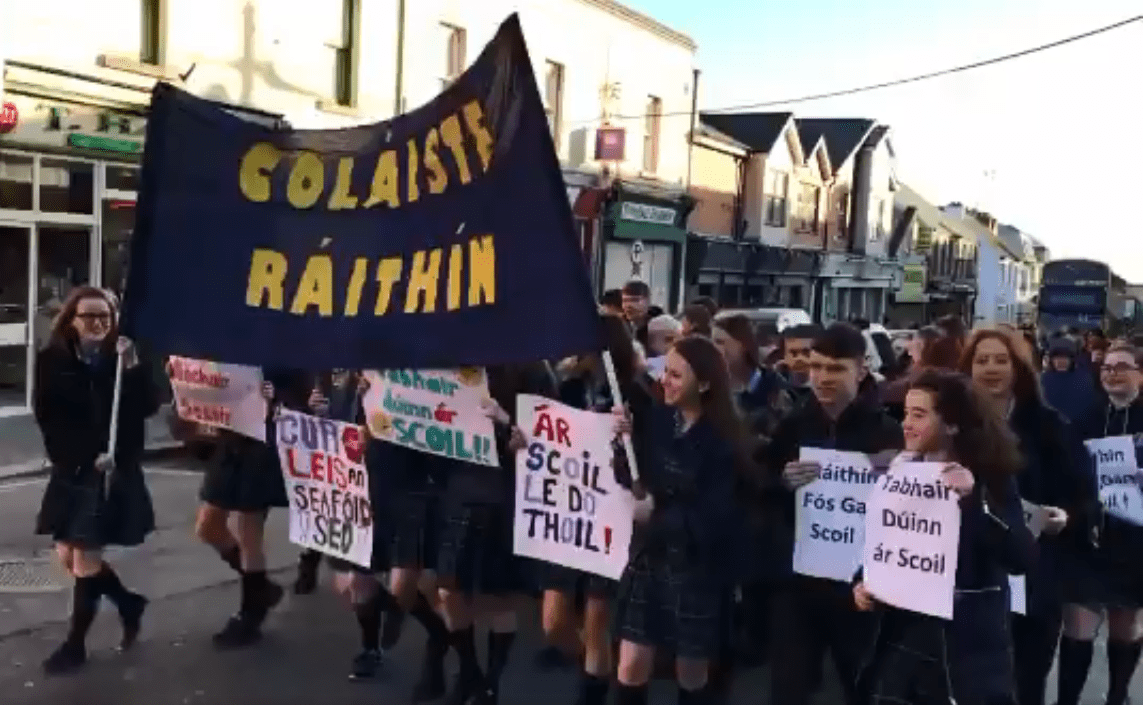 171
SHARES
ShareTweetSubscribe to our Newsletter
#mc_embed_signup{background:#fff; clear:left; font:14px Helvetica,Arial,sans-serif; width:100%;} /* Add your own MailChimp form style overrides in your site stylesheet or in this style block. We recommend moving this block and the preceding CSS link to the HEAD of your HTML file. */

Students of Colaiste Raithín marched today on the streets of Bray in protest of the continued uncertainty over their new premises.

The students walked across the town to deliver a letter to the Minister Simon Harris, demanding the keys to their new school.

Students from @ColaisteRaithin on their way to the Office of Minister Simon Harris to deliver a letter demanding the keys to their new school. We need answers and an end to this crazy situation #Carillion @rtenews @TV3Ireland @morningecfm @Wicklow_News @WicklowThisWeek pic.twitter.com/tSxnPCzasK

The school building has been left in uncertainty after building company Carrilion—who were building the school on behalf of the Government—went into liquidation in recent weeks.

On January 30th, many students and teachers from Colaiste Raithín handed in a petition to the Dáil, asking the government to ‘give us our school’.

Students and teachers also attended a debate in Leinster House the same day regarding the status of their school.

Wicklow TD for Sinn Féin John Brady, who was present with Colaiste Raithín at Leinster House, expressed his disappointment of the lack of commitments being made by Education Minister Richard Bruton in relation to the timeframe for the opening of Coláiste Raithín.

“It is regrettable that the Minister has failed to afford students, teachers and parents with anything other than talk. After an hour long debate, nobody is any the wiser.”

Last week the principal of Colaiste Raithín, Gearóid Ó Ciaráin said “our school is complete at this stage, all the final fixings have been done so we’re somewhat alarmed this morning at the possibility of workers moving off the site”.

“The school is ready to move into, we’re in dire straits here, so its outrageous we can’t move into it.”

The Department of Education and Skills announced last week it is aware of the compulsory liquidation of Carillion. They stated they are currently assessing the implications of the Carillion liquidation for this contract.

Carillion is also responsible for St Philomenas in Bray, and three other schools in counties Carlow, Meath, and Wexford.